Parental warning: books are dangerous. Here’s how to protect your kids from subversive ideas.

Previous Next
Parental warning: books are dangerous. Here’s how to protect your kids from subversive ideas.

The letters spell out the many problems created by ratings that oversimplify material and take it out of context. 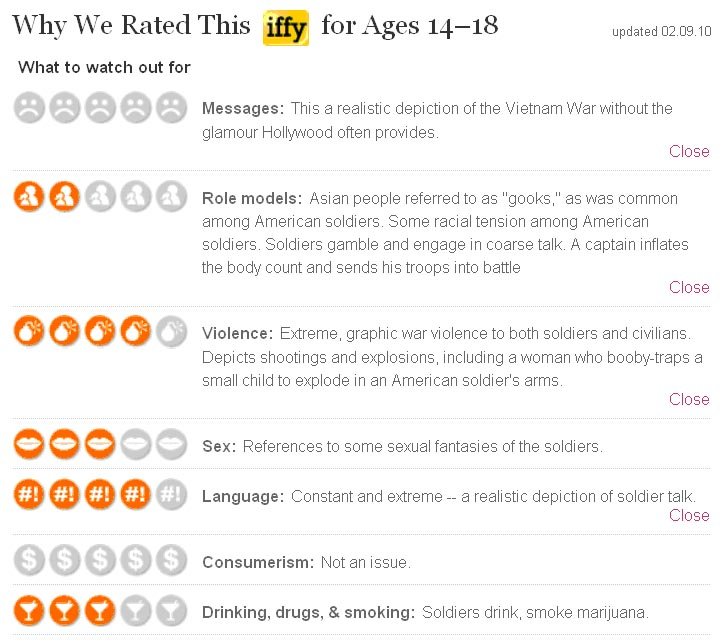 We represent national organizations that promote reading and literature. We are writing to you because our organizations share many of the same goals as CommonSenseMedia.org—in particular, the desire to guide young people to the best sources of information and entertainment and to keep parents informed about the educational value of books, even those that some may find controversial or offensive.

While we think that Common Sense Media provides a great deal of useful information, we have serious concerns about the ways CSM rates books. Our concerns fall into three general areas: 1) the implication that certain kinds of content are inherently problematic, 2) the negative attitude towards books, and 3) the potential that the ratings will be used to remove valuable literature from schools and libraries.

1) The implication that certain kinds of content are inherently problematic.

Under “What to watch out for,” the reviews rate books for violence, sex, language, consumerism, and drinking, drugs, & smoking. By focusing on these categories, the ratings imply that young people need to be “protected” from such material, and they encourage parents and students alike to avoid literature containing this kind of content, regardless of its merit. By quantifying content using a few emoticons that focus on only a small part of the content of the book, the ratings take material out of context and deny the message, intent, and value of the book as a whole.

Instead of encouraging people to view books through such a negative and value-laden lens, we urge a focus on the positive things books bring into the lives of young people. Reading enriches, educates, and entertains readers, and challenging literature can play an important role in a child’s learning and development. People select books based on their own values, needs, and interests. Parents can make better and more informed decisions if they have information about the age appeal of a book, its literary merit, topical interest, thought-provoking potential, and entertainment value. Kids read not only to learn, but also to have fun.

2.) The negative attitude towards books.

For example, Chains by Laurie Halse Anderson is the story of a slave girl in 1776 who is confused when she discovers that both the Loyalists and Patriots support slavery. The review features two frown faces, four bombs, and three martini glasses, but says nothing about the book’s educational value. Not until the very end of the summary, after the ratings and warnings, does the review note that the novel “brings history to life with unforgettable power.”

The review of Beloved, by Nobel and Pulitzer Prize-winning author Toni Morrison, is likewise silent on the question of educational value, but states that “[s]ensitive readers of any age might find this material too disturbing to make the book worthwhile.” This statement is inconsistent with virtually all professional reviews of the book. Publisher’s Weekly wrote: “This novel is a milestone in the chronicling of the black experience in America. . . . [I]t should not be missed.” Other reviews called it “a masterpiece,” “brilliant,” “a triumph,” and “dazzling.”

The idea that a book might not be worthwhile reading because it contains disturbing material would disqualify a vast quantity of great literature, including Shakespeare, the Greek tragedies, and the Bible. We doubt that your intent is to discourage the reading of books of unquestionable value because they may upset some readers, but that is precisely the message conveyed.

The age ratings in the reviews are frequently inconsistent with the ages at which the books are commonly taught in schools. For example, CSM rates Chains, discussed above, as “iffy” for 12 – 14 year olds, even though it is widely taught in 8th grade. Slaughterhouse Five, a classic work, is rated “iffy” for 14 to 18 year olds yet widely taught in high school. Judy Blume’s novel, Are You There God? It’s Me, Margaret, is widely read by 4th and 5th graders but rated “iffy” for 11 – 13 year olds. The fact that the age ratings are inconsistent with the opinions of educators and librarians not only casts doubt on the validity of the ratings, but also creates a serious potential that they will be used to remove valuable, age-appropriate materials from schools and libraries.

Book censorship is a major problem in schools and libraries all over the country. Books are challenged because they contain something that someone – a parent, religious leader or elected official – considers “objectionable” or “age-inappropriate.” Challenges run the gamut, from objections to books that contain profanity, violence, sexual content, racial language, and religious references, to those depicting “bad” role models, non-traditional families, unhappiness, or death. It only takes one person to file a challenge and launch a battle that can last for months and disrupt an entire school system.

Unlike requests for alternative assignments, which most schools offer to parents who object to a particular reading assignment, most book challenges seek to have a book removed from the curriculum, library, or reading list, limiting access by all students. When they succeed, these challenges impose one set of views and values on everyone, including parents who don’t want to have the book removed. More importantly, the students are deprived of the opportunity to read important literature under the guidance of a teacher.

While your mission statement denounces censorship, we believe that your selection tools can easily be used by censors. This is a predictable consequence of the focus on sex, language, violence, etc., removed from their narrative and literary context, rather than on the mind-expanding and life-altering potential of challenging literature. Beloved, for example, is a classic American novel of unquestioned worth, yet it is frequently challenged for language and sexual content. It was among the American Library Association’s list of the ten most censored books in 2006, and not long ago it was removed from an advanced placement English class in a high school in Kentucky. Catcher in the Rye is on the ten most censored list for 2009 – also because of complaints about sex and violence.

CSM reviews endorse and encourage this blinkered view of literature and will ultimately undermine the very goals you purport to promote. If anything, parents need help understanding how reading widely helps prepare their kids for life, not scare tactics about exposure to books depicting sex, violence or bad role models. Children are rarely, if ever, harmed as a result of reading a book, but they can be disadvantaged for life by ignorance.

We do not believe this is what you had in mind. We assume we share important goals – providing information to parents, helping them understand the value of literature, respecting the right of children to read and their need to explore the world through books, and opposing censorship. We hope we can engage in a productive discussion about how to achieve these goals and would like to arrange a meeting to consider how we might proceed towards that end.

We appreciate the changes in some book reviews that you’ve made in response to our specific criticisms.  However, the piecemeal approach can’t repair what we think is essentially a flawed concept.  As we indicated, in our view, books cannot be “rated” based on either “good stuff” or “stuff to watch out for”.  Ratings create a barrier to understanding the complex interplay of words, ideas and images that form the fabric of a novel.  The alternative universe that fiction creates is destroyed when viewed in such a fragmented fashion:  taking words and scenes out of context distorts their meaning and the story the author is telling. Rather than informing parents, ratings actually misinform them about what a book is about and what it may offer the reader.  The fact that you single out content involving sex, violence, profanity, etc. compounds the problem, by adding value-laden criteria to the mix.

In our collective experience representing many years observing how censorship works, the kind of information you post on your site is routinely used by parents to guide their children away from certain kinds of content, by school and library personnel who want to steer clear of controversy, by religious figures who preach about the evils of books containing certain content or messages, and by those who seek to remove books from schools and libraries because they are not “age appropriate” or because they contain profanity, sexual content, violence, or depict “bad” role models.  This is an every day occurrence in this country, as the panicked response to protecting children spins out of control.

Children cannot and should not be protected from reality or fantasy. They need to be allowed to escape into fictional worlds and have vicarious experiences through them.  Books afford children opportunities to safely explore things we hope they will never have to experience in real life.  Children who grow up without the freedom to explore the world that literature offers are truly impoverished.  Telling parents what they should “watch out for,” in our view, plays to unfounded fears and is profoundly misguided.

Your comments about what visitors do after they read information on your site has no bearing on our concerns and raises other questions.  It is not possible to know with any certainty what people do with the information they obtain on your site.  We assume you base your data on responses to the question “Is it a keeper for your kids?”  However, self-reporting is notoriously unreliable and its results are meaningless because of selection bias.  In sum, without further explanation, we have no basis for accepting the proposition that your site encourages people to read the books you review, which is your principal defense of your approach.

Our concerns are heightened by your refusal to disclose information about how you approach the task of rating and reviewing books, specifically 1) how you select and train book reviewers, and whether there is a process for reviewing their submissions for quality, accuracy and consistency, 2) how your “developmental grid” was created, including the names of any child development experts who are or have been involved, and the nature of their involvement.  You say you provide “trustworthy” information, and we are merely asking you to document that claim. You say you believe that “rating systems should be … transparent,” but your own is opaque.  The absence of a candid exchange of information, and our fundamental disagreements about ratings for books, lead us to think that further discussions would be fruitless.