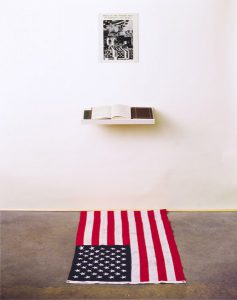 Dread Scott, What Is the Proper Way to Display a U.S. Flag?

An art exhibit featuring flags at Nassau Community College in Long Island, New York has elicited a vibrant discussion of symbolism and the value of dissent among veterans, county officials, artists, faculty, students and area residents. The exhibit included an installation by Dread Scott, entitled What is the Proper Way to Display the U.S. Flag? The work displays a photomontage of a flag-draped coffin and South Korean students burning an American flag. On the floor in front of it is an American flag which the artist invites viewers to walk on in order to write their responses in a book placed on a shelf under the photos. The interactive installation has been the object of protests wherever it has been shown—particularly at the School of the Art Institute in Chicago in 1989.

At Nassau Community College, veterans picketed outside and, in the gallery, some visitors picked up the flag, folded it properly, and put it on the shelf before writing their comments. The county head of veterans’ affairs claimed that the flag belonged to the county and attempted to “return” it to the county executive. He was deterred when the college president told him it belongs to the artist and he could be sued for $100,000 which is what the flag was insured for.

Nassau County Executive Thomas Suozzi asked the college president ” to remove the work. Even though he believes in free speech and the right to burn the flag” wrote Suozzi, “rights are not at issue here; responsibility is what matters most.” He demanded that the “desecration” stop. “On behalf of Nassau’s veterans, residents, and taxpayers, the message needs to be..’DON’T TREAD ON ME.'” College President Sean Fanelli refused to remove the work. “…[G]overnmental responsibilities do not permit us to trample on the constitutional rights of others….I know that we disagree on this issue,” he wrote, “but it is the Flag itself that symbolizes our freedom to do that.”

The college held forums with the artist and representatives of veteran organizations, a response NCAC applauds. The best response to free speech controversies is “more speech, not enforced silence,” as Justice Lewis Brandeis observed 60 years ago.

Nassau Community College, which opens its Board meetings with a flag salute, is no stranger to free speech controversies. It was picketed over a college production of Christopher Durang’s satirical play, Sister Mary Ignatius Explains It All to You in 1985, and sued in the 1990s over a course in human sexuality (Censorship News 73).