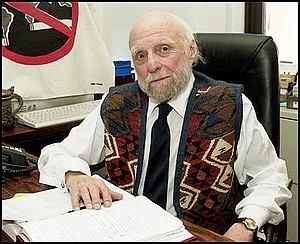 Jeremiah Gutman, a dedicated champion of the First Amendment and Chair of the National Coalition Against Censorship, died on February 25, 2004 in Westchester County, New York at age 80. He had been an officer of the Board of Directors of NCAC since the 1980s, first as General Counsel and then as Co-Chair before assuming the Chair in 2001.

Gutman worked tirelessly to promote and defend First Amendment principles of freedom of thought, inquiry and expression, which he saw as a basic source of civil and human rights. Both in his legal practice and volunteer activities, he was deeply committed to free speech as integral to equality and social justice. In the 1960’s, he assisted voting rights efforts in Mississippi, and, during the Vietnam War era, he represented conscientious objectors. He served on the board of the New York Civil Liberties Union, the American Civil Liberties Union, the American Israeli Civil Liberties Coalition, Meretz USA, and a number of other civil rights and civil liberties groups.

He will be deeply missed in the First Amendment, civil rights and civil liberties communities.