by Roland Stoy for The Reporter

The painting was later showen at an art show less than a block away from the courthouse. According to the artist: “Everyone that saw the painting appreciated it and some folks had strong words for the courthouse officials that pulled the art from exhibit. I felt it was a real coup to display it to the public again.”

COLDWATER, MI- There have often been paintings from members of the Branch County Art Guild displayed at the Branch County courthouse, on the south wall of the entranceway. A painting of an Arab woman entitled “Make Peace Your Jihad” was removed Tuesday after two hours with what Count 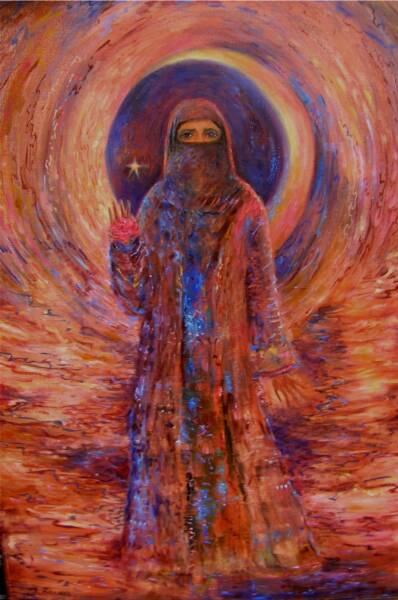 y Administrator Bud Norman said were “security and safety” concerns as large numbers of people gathered around it. Many were also reading a letter posted alongside.

“It was taken down not so much because of the subject matter, but due to concerns for security and safety,” said Norman. While he acknowledged the subject matter might be controversial to some, he pointed out the narrow passage between the security area and the south wall, with scores of people daily entering and exiting the courthouse, including Branch County Sheriff’s Office deputies escorting prisoners to and from court.

He said he did not make the decision to remove the painting. “I don’t have the right to take it down,” he said. The painting was removed by Peg Voss of the Art Guild after she had received a call from Gloria Norris, also of the Art Guild, who had been contacted by her daughter Terri, an assisting prosecuting attorney at the courthouse. The letter of explanation by the artist, Kathryn Barnes, began “This artwork is a representation of the artist’s wish for a world at peace… She stands in the vortex of swirling chaos, and behind her are the symbols of Islam, the crescent moon and star.”

An email to the Daily Reporter Wednesday said she had previously exhibited the painting elsewhere with no public objections, and carried a quote by Barnes saying “It is only an artistic expression of a vision for peace. I had no intention of causing trouble with it.”

It said this is the first time any of Barnes’ work has been pulled from a public exhibition place and she does not understand the reason for it. “The artwork is not pornographic or in any way inflammatory. It merely shows an Arab woman holding her hand out with a red rose in her palm. It is from a dream I had to reach out to all faiths and make peace the jihad, not war. I don’t consider it anything that should be banned.” Norman did not say it was “banned.” He said the matter will be brought to county commissioners, and speculated that a committee might be formed to deal with future art displays.

In a letter to the editor of the Battle Creek Enquirer, Svetlana Mintcheva (NCAC Arts Program Director) wrote, “Removing Kathryn Barnes painting from the Branch County Courthouse because people wanted to look at it is rather paradoxical. (Anti-War Art Sparks Controversy, July 31) Should the Courthouse remain open only for art that nobody cares to look at for more than a second? If the narrow passage where the work was hung was getting too crowded, surely there must be another, slightly more spacious location. We should be pleased that people stop and look at a painting, we should be delighted when art creates dialogue ? it is nothing to be feared. The political or social position expressed by one of the works exhibited in a government venue does not compromise its neutrality. Neutrality means being open to all kinds of ideas, it does not mean that art which takes a position and provokes thought should be kept out.”