The Hyde Park post office started hosting the Artist of the Month program, giving local artists the opportunity to display their work for an entire month in a place that draws hundreds of people per day. The works were on display in a special window in the building’s lobby. 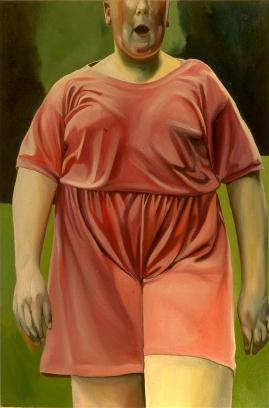 On Oct. 31, 2001 Hyde Park artist Audrey Francis had her painting, "Fatgirl," approved for display in November. It went up on Nov. 1. Two days later Postmaster John Viola contacted Antonio Marquez, curator of the program, to inform him the post office had received a letter from a town resident who found "Fatgirl" offensive. Viola asked Marquez to consider removing the painting. Dr. Marquez told Post Master Viola that it is unwarranted to remove the painting based on a single complaint.

On Nov. 7, Viola contacted Francis to tell her to remove the painting, but he gave her the option of replacing it with another. Viola also told Francis the Artist of the Month program had been canceled. Francis refused to replace "Fatgirl" and removed the painting later that day.

"Fatgirl," which depicts a heavy-set female dressed in pink, is "a very beautiful painting," Francis said this week. "I don’t know why anyone would object to it. Maybe it’s the title. It has no nudity, sex, violence or hate in it at all."

Marquez said that, until the controversy, the Artist of the Month program was "a success. Every show has been a success. The ‘Fatgirl’ … painting was a beautiful figure and it was not attacking fat people. Nobody understands why the painting had to be removed and why the program was canceled."

Tony Musso, a spokesman for the U.S. Postal Service, said that in addition to the one written complaint about "Fatgirl," there were some verbal complaints made to the window clerk at the Hyde Park Post Office. He also said that if Francis and Marquez had reached an agreement about replacing the painting, the program still would be running.

"The post office is not an art gallery and is not really the place to have anything that could be offensive," Musso said. "It (the ‘Fatgirl’ painting) was causing some controversy, so the postmaster asked for it to be removed. It was good to terminate (the program). We wanted to make sure nobody gets offended when they come into the post office to do business."

Francis’ "Fatgirl" painting was moved to the Hyde Park Free Library, joining an exhibit including several other paintings by Francis. There were no complaints.