NEW YORK – The National Coalition Against Censorship has been joined by artists and action groups concerned with free speech and LGBTQ rights to express grave concern about the cancellation of Men In Living Rooms at the Stonewall National Museum & Archives at Fort Lauderdale, FL. In a letter sent to the Stonewall Museum today, NCAC Director of Programs Svetlana Mintcheva wrote "We strongly urge you to reverse your decision and return the photographs to display for the scheduled duration of the show as well as to develop a clear exhibitions policy with specific criteria as to what can be shown at the Museum." 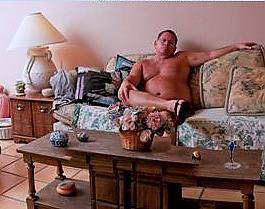 NCAC received reports that Men In Living Rooms had been pre-approved by the Board of the Museum and put on display as scheduled in early September, but was subsequently taken down because of complaints that it might be inappropriate for school groups visiting the Museum.

"As a museum dedicated to the exhibition of LGBTQ culture in all its forms, we find the prospect of self-censorship by a fellow organization distressing" commented New York City's Leslie-Lohman Museum of Gay and Lesbian Art, a co-signer of the letter. "There are certainly enough external demands for the censorship of our lives already; we hardly need to add to the chorus."

NCAC's letter went on to connect a recent rash of children's book bans in Illinois and Utah due to fears of "inappropriate" LGBTQ-friendly material to the logic behind cancelling Men In Living Rooms. The cancelled show features no full frontal nudity, while "School groups can see much more explicit nudity in a regular art museum."

"The cancellation of Jeff Larson’s show thus raises the question whether, in deference to the often conservative, and even homophobic, sensitivities of the culture at large, the Stonewall National Museum & Archives will head down the slippery slope of censoring material that could be considered controversial by some and thus compromise its mission as 'an epicenter of enlightenment for the LGBT community'".

Link to Scribd: Letter to Stonewall National Museum and Archives re: Cancellation of Jeff Larson's Men In Living Rooms