The National Coalition Against Censorship, the ACLU of Southern California, The First Amendment Project of Oakland, CA and a large number of local and national artists announced that they are protesting the removal of Alex Donis' exhibition, "WAR," from the Watts Towers Art Center. 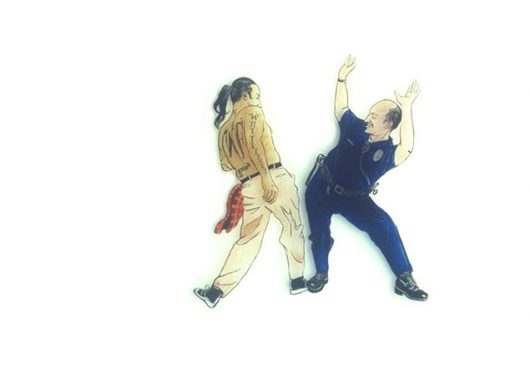 The show, which is comprised of a series of paintings featuring fictionalized pairings of LAPD officers and gang members in same-sex dancing poses with companion text from renowned African-American poet and performance artist, Keith Antar Mason, stirred controversy. The Watts Community Action Council warned of protest and possible violent action by members of the Watts community. The Art Center Director, Mark Greenfield, in consultation with Los Angeles Cultural Affairs Department General Manager Margie Reese, decided to take the exhibition down.

In a letter to Mr. Greenfield and Ms. Reese, the groups and artists urge the Los Angeles Cultural Affairs Department to live up to the requirements of the First Amendment and take a stand for artistic expression by reinstalling the show as soon as possible. Furthermore, they called for a policy to ensure that First Amendment rights are protected in the future.

The letter states, "a government sponsored art space cannot legally cancel an exhibition of constitutionally protected expression merely because the art may offend the sensibilities of certain members of the community."

"Art challenges the very notion that there is only one way of seeing things, " said Heather Carrigan, Director of Public Policy at the ACLU of Southern California. "No one is required to like Mr. Donis' art, but everyone should be allowed to make that judgment for him or herself."

Svetlana Mintcheva, Arts Advocacy Coordinator at the National Coalition Against Censorship, said that "if warnings of controversy and possible violence succeed in silencing expression, then violence prevails over freedom and democratic dialogue."