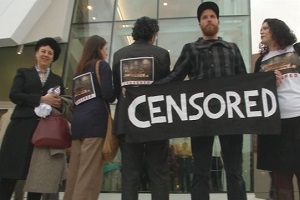 The National Coalition Against Censorship received word that Ruth Stanford's "A Walk in the Valley" will be restored to Kennesaw State University's Zuckerman Museum of Art. NCAC sent a letter (below) to Kennesaw State University President Dr. Daniel Papp, objecting to the removal of the commissioned artwork from the museum's opening exhibit. The University said “A Walk in the Valley” was pulled because it did not fit the "celebratory nature" of the opening.

In the letter, NCAC Director of Programs Svetlana Mintcheva argues that Papp's decision violates the University’s own standards of academic and artistic freedom and raises serious constitutional concerns.

As a public educational institution, Kennesaw State has an obligation under the First Amendment not to discriminate against particular ideas, no matter how controversial they might be,” said Mintcheva. “As the Supreme Court has repeatedly observed, ‘The vigilant protection of constitutional freedoms is nowhere more vital than in the community of American schools'”.

Ruth Stanford was commissioned to create a piece about the homestead of noted Georgia author Corra Mae Harris, which the University accepted as a gift in 2008. The resulting installation, “A Walk in the Valley,” was taken down shortly before the Zuckerman opening on Saturday, March 1st, upon orders by the University administration. The artwork incorporated a reference to a notorious magazine article by Harris about lynching, written and published in 1899. That same article caused controversy on campus when the University accepted the homestead.

NCAC called on KSU to reinstate the artwork "as soon as possible" and to establish written selection policies for the Zuckerman Museum to “empower it to show art from many and diverse viewpoints, including those which may spark controversy.”

As a model, NCAC offers a Best Practices for Handling Controversy” document, which was jointly drafted and endorsed by major national arts organizations including Americans for the Arts, the American Association of Museums, the Association of Academic Museums and Galleries and the College Art Association.