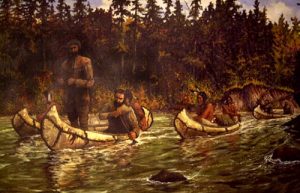 "French Trappers on The Red Cedar" by Cal Peters

UPDATE August 8, 2016: Shortly after receiving NCAC and FIRE’s letter on Friday, Aug 5th, Wisconsin-Stout Chancellor Bob Meyer announced the two paintings will not be placed into storage but will instead be relocated for display under “controlled circumstances.” In an interview with local radio, Chancellor Meyer explained the intent behind his initial decision was not to censor, but was rather a strategic “business” move to encourage more Native American student applications to the university. Today, NCAC’s Director of Programs Svetlana Mintcheva commented on the new developments in the following statement:

"While we are pleased that the works will remain on display, the Chancellor's explanation of the decision to move the paintings to a less visible location is even worse than the move itself. In justifying the decision as a ‘business’ one, whereby more Native Americans may be attracted to Stout were they spared the encounter with a national history which may make them ‘feel bad,’ he appears to be treating future students as mere consumers and education as a mere product. This betrays the mission of a University, which is to challenge, to help students confront the past critically, to make them think. Encounters with an often brutal history are part of the educational process, censoring stories that don’t feel good is not. What’s worse is the disrespectful and patronizing assumption that future students need to be shielded from these historical realities."

The Chancellor at the University of Wisconsin-Stout has announced two of three historic paintings depicting interactions between white traders and First Nations people are to be removed from public view because of their potentially "harmful effect" on students and other viewers.

The paintings, which were commissioned under the Works Progress Administration and painted by artist Cal Peters in 1935, can be found in the University's Harvey Hall, a building currently undergoing major  renovations. In preparation for the Hall's grand re-opening this fall, the paintings were to be restored by university art students under the direction of their professors. The restoration work, funded by the Wisconsin Historical Society, began back in 2013.

This summer, however, the paintings caught the eye of the University's Diversity Leadership Team (DLT) who expressed concern that the depiction of First Nations people would reinforce racial stereotypes. The issue was brought to the attention of University Chancellor Bob Meyer who, after a series of discussions with the DLT, ruled in their favor. Because of the risk of "having a harmful effect on our students and other viewers," the paintings will not appear in the new Harvey Hall and will be placed into storage, Chancellor Meyer announced. Given the sensitive subject matter of the paintings, he continued, if they are to be displayed, it must be in "a controlled gallery space" that provides "context" for a viewer.  And “a controlled gallery space” just does not exist at the University, so the paintings will most likely just remain out of view. The paintings in question can be viewed here.

Timothy Shiell, an English and Philosophy professor at the University, who contacted NCAC about the incident, expressed frustration over the decision. The Chancellor did not consult the rest of the university faculty, groups or student body prior to the making of the decision, Prof. Shiell explained.

He noted the precedent the decision sets when similar complaints are leveled at the university in the future. "Shrouding or moving the painting does not educate anyone or stimulate any learning or dialogue," Prof. Shiell said in a statement. "American history and representations of that history can be ugly and offensive.  But hiding them doesn’t change the past or the future."

A U.S. History Professor at UW-Stout agrees with Chancellor Meyer's decision, however. Prof Kate Thomas argues the paintings stand in the way of thw university's goal of creating an environment inclusive of diverse populations, including Native Americans.

The controversy at the University of Wisconsin-Stout is the latest in a number of similar incidents surrounding art depicting historical scenes. In May, Norwalk, CT, residents ruled that a mural depicting African-American slaves walking along the Mississippi river was to be removed from the City Hall. And at the University of Kentucky in December, the administration moved to shroud a mural depicting African-American slaves picking tobacco after objections from students of color.

NCAC believes historical work like Cal Peters' provides an opportunity to engage with and reflect on the lasting and important questions raised by these traces of historical memory. At a time when the lingering effects of systemic prejudice and racism continue to be felt this is of particularly importance. Placing Peters' paintings in storage misses this valuable educational opportunity.