A Revealing Cover Up: The Censoring of the “Legendary Children” Exhibit

Previous Next
A Revealing Cover Up: The Censoring of the “Legendary Children” Exhibit

Jennifer Lu is a sophomore at NYU studying Media, Culture, and Communication, and she is a programs intern at NCAC. She hopes to learn more about the relationship between censorship, media, and freedom of expression, and ultimately to pursue her post-academic career in First Amendment Law.

Gallery 1526 in Atlanta has always embodied the spirit of the city’s large drag scene and promoted artistic freedom. Previous exhibitions reflected openness towards representations of nudity, and references to drag culture and homosexuality. That is why the controversy over the gallery’s newest show, “Legendary Children,” came as a surprise.

The exhibition consists of pictures of the city’s drag scene and culture, featuring the works of Matthew Terrell, Jon Dean, and Blake England, among thirteen others. In one of England’s images, drag queen Violet Chacki’s penis is in plain view, while in another, her rear end is the focus, along with a gaff (a piece of underwear worn to hide a drag queen’s private parts). Jon Dean’s most provocative piece was one in which the background is an image of lips and saliva.

Individuals who worked in the building where the gallery is expressed their discomfort at having to see these “disturbing” images everyday, and they requested the images to be removed. One of the workers, Dov Jacobson, furiously claimed that the gallery owner, Melanie Bell, was “promoting pornography with the exhibit.” To her credit, Bell refused to take down any images and found a creative solution – one that also drown attention to the problem of censorship and persisting cultural prejudice – by covering the “offensive” parts of the photos with black paper. 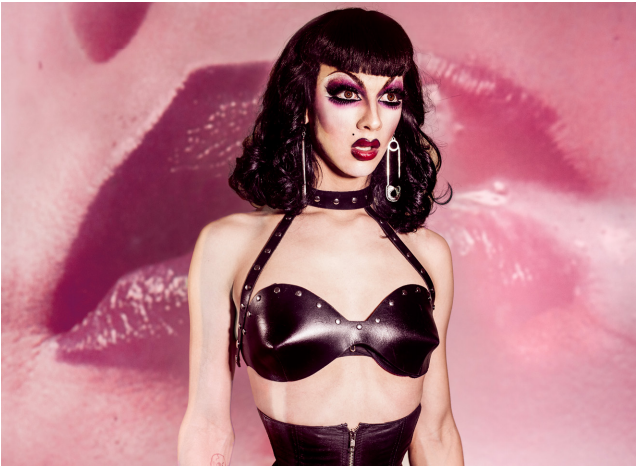 The black paper covering the images makes us think about our cultural ideals versus the culture we really live in. Americans think of themselves as open and tolerant of differences of race, sexuality, and religion (note, for example, recent legislative wins in the LGBTQ movement the past few months), but when such instances of censorship in art exhibitions come up, we realize we are not as tolerant as we aspire to be.

Why, for instance, is it OK to display pictures of nude women, but not a nude drag queen? Why are exposed women’s bodies considered art, while the bodies of transgendered individuals or transvestites are labelled “pornographic”? Apparently we still live in a society of heteronormative “standards”: an image of a heterosexual couple making out may be appropriate for any billboard in town, but a portrait of a drag queen needs to be covered, even in a gallery space.