2012 has already brought a few cases of censored art to our attention: Microsoft Skydrive froze UK blogger Michael Ohajuru‘s storage account because Modigliani’s painting “Reclining Nude” violated Microsoft’s Code of Conduct which prohibits images that “depict nudity of any sort”; and ?zmir Metropolitan Municipality removed three photographs (below) from the exhibition “Aykiri” (Contrary) at the Izmir Art Center in Turkey as they reportedly “insult religious values.”

But let’s reflect on the hot topics of art censorship in 2011: nudity, sexuality, religion, politics, and… meat?!

Facebook; too prude for nude?  Throughout 2011, and to this day, artists are in a constant battle with Facebook and their no nudity policy that results in the repeated removal of images that contain even the slightest hint of nudity.  Such measures include: removing artist Frode Steinicke’s upload of Gustave Courbet’s “The Origin of the World”; declaring a Breast Cancer Awareness Body Painting Project by Michael Colanero “pornography”; removing drawings of nudes from the page of the New York Academy of Art (later reinstated); and pulling the account of curator Savannah Spirit for uploading images from the exhibit “Hotter Than July: A Sexploration.”

Still from “The Last War Crime”

While much more reasonable than Facebook, YouTube also took a misstep when it removed a one-minute clip from The Pen‘s film “The Last War Crime” featuring waterboarding, on the generic grounds that it contained “nudity, pornography, or other sexually provocative content.”   In response to more than 7,000 personal protest messages, YouTube reinstated the censored clip.

The aversion to nudity even extends to dolls.  Artist Amber Hawk Swanson uploaded a performance video portraying the transformation of a life-sized sex doll modeled on the artist herself into a small replica of a bull orca to Ustream.  Two hours into the performance online broadcast stopped and viewers where provided with a message stating the broadcaster was “banned due to violating terms of service.”

Such censorship also extends to museums.  The Oi Futuro Flamengo Museum in Rio de Janeiro, Brazil, deemed some of Nan Goldin’s photographs “inappropriate” and subsequently canceled her exhibition, which contained images of sexual situations and drug use.

Private citizen groups often lead censorship efforts provoked by nudity: on New York’s Lower East Side a group of local Orthodox Jews called police claiming “Pornucopia”, a show at the  Allegra LaViola Gallery, was  obscene (see images below); at the Marin County Civic Center, CA a nude painting by Sylvia Cossich Goodman was taken down after an employee complained it created “a hostile work environment”; at the opening of the Canaday Art Exhibit, a student show at Bryn Mawr College, Amanda King’s photographs of nine students from the neck down in their underwear were removed; and at Arthouse in Texas concerns that teens might chance upon Michelle Handelman’s “Dorian” led to the video installation being turned off at prime time viewing hours, because of the presence of teens and teen programs (this approach was subsequently abandoned in favor of placing a guard in front of the space containing the installation).

On a musical note, sales of Lady Gaga’s album “Born This Way” were banned in Lebanon because the album was considered offensive to Christianity; however, it is likely the underlying gay-pride subtext of the album encouraged the ban.  Just prior to this incident, Malaysia also banned sales of the album because it promoted homosexuality.

Some people have such a repugnance to nudity and sexuality in art that they are driven to vandalism.  In April 2011, Susan Burns was visiting the National Gallery of Art in Washington DC when she tried to pry “Two Tahitian Women” by Gauguin from the wall.

Demonstrations of vandalism also extended to attacking art with a religious theme: Photographs by New York artist Andres Serrano, “Piss Christ” and “The Church”, were damaged “with the help of a hammer and an object like a screwdriver or pickaxe” whilst on exhibit at the Collection Lambert in south-west France; and Mideo Cruz‘s piece “Poleteismo,” on display at the Cultural Center of the Philippines as part of the “Kulo” exhibition, was vandalized and criticized as “blasphemous” by Catholic activists and the main gallery was forced to close after “threats to persons and property” were made.

Irreverent religious art also led to: the ousting of Jack Persekian, director of Sharjah Art Foundation, after the Algerian artist Mustapha Benfodil’s show “Maportaliche/It Has no Importance,” consisting of mannequins in soccer uniforms emblazoned with Arabic phrases deemed blasphemous, was included in the Sharjah Biennial; and the Azerbaijan’s government covering up two large-scale sculptures by artist Aidan Salakhova (below) at their pavilion at the Venice Biennale after president Ilham Aliyev reportedly expressed concerns about their treatment of Islam and depiction of his country. 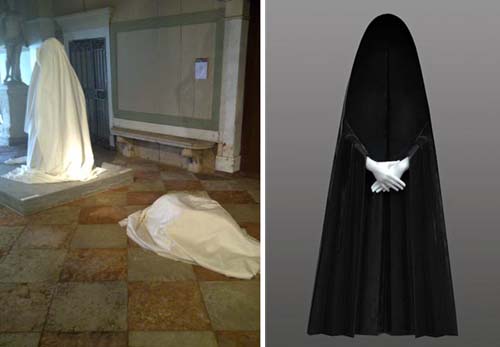 Religion and politics colluded at the cancellation of the high school student production of Kismet by Richland, Pennsylvania School District due to the proximity of the town to the 9/11 attacks.

Other cases of censorship driven by politics include: Governor Paul LePage’s removal of a Maine Department of Labor mural that depicted the state’s labor history as he considered it to be “one-sided”; the temporary removal of several photographs taken by veterans from the walls of the “Conflict Zone and The Art of Debriefing” exhibition at the Expo Arts Center in Long Beach, California as they were deemed “too graphic” for a Councilwoman’s public event/ fundraiser, at the gallery; and artist Larissa Sansour was removed from shortlist for the Lacoste Elysée Prize as her work was considered “too pro-Palestinian”.

Artwork made by children also bore the brunt of political censorship last year.  Intimidation and pressure from Israeli lobby groups who claimed the drawings of children in Gaza (see below) who lived through Israel’s attacks in the winter of 2008 to 2009 were “anti-Semitic” so the Museum of Children’s Art canceled the exhibition “A Child’s View of Gaza” at the last minute.

As we have seen, artworks that depict nudity, sexuality, religion, and politics are the most prone to censorship, but there really is no rhyme or reason to why certain art works are targeted.  What can only be described as “meat art”, displayed in a restaurant in Spokane, Washington was removed in fear of offending their vegetarian customers.

On a positive note, despite protests, which in 2010 led to the removal of the exhibition from the walls of the Smithsonian, “Hide/Seek” remained on the walls of the Brooklyn Museum.  In fact, the very same reporter who was at the forefront of the controversy last time has been at it again.  At the beginning of 2012, Penny Starr published an article complaining about “Seeing Gertrude Stein: Five Stories,” an exhibition focusing on homosexual lifestyle, which was exhibited at the National Portrait Gallery earlier this year.  This time, nobody listened.

To keep up-to-date with news on censorship please visit wiki.ncac.org or pair.ncac.org/.

If you wish to report any censorship concerns, please contact: [email protected].