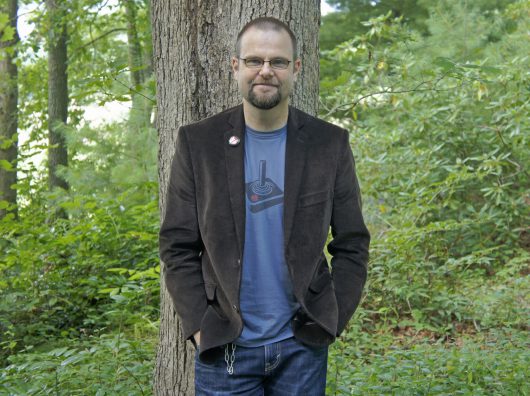 Alan Gratz has written over a dozen award-winning books for young readers.

His latest YA novel, Ban This Book, tells the story of Amy Anne Ollinger, an avid reader who organizes a campaign of resistance when her favorite book and several other titles are removed from the school library. It’s funny, uplifting, enlightening and above all, empowering.

Ban This Book starts with Amy Anne’s favorite book being banned from the school library.  She’s devastated and decides to do something about it.  What inspired you to write this story?

I visit a lot of schools every year, and when I talk about Ban This Book, one of the questions I get at almost every school is, “What’s a book ban? What’s book-banning mean? What’s a book challenge?”

A lot of kids, particularly elementary and middle school kids, are not even familiar with the idea of book censorship and that it is happening across the country. They may have read about it in a historical context – Nazi Germany and book-banning and book-burning – but many of them don’t realize that this is something that happens even today.  A lot today.  So, I wanted to write something that discussed that and introduced that concept to them, but also gave them a model for how to respond.

Though smart and very passionate, Amy Anne has a hard time speaking up and expressing herself.  Her mom even tells her that keeping her thoughts and feelings inside isn’t healthy.  So my favorite part of reading the book was following her gradually gain more self-confidence and self-awareness.

What inspired this theme?

I was very inspired by my wife’s tales of her childhood.  I did not know my wife as a child, but I know that she always had her nose buried in a book and often used reading as a way of escape from family situations she didn’t want to deal with. She sort of disappeared into that world.

I really wanted to build that same kind of world for Amy Anne.  Giving her that personal issue, that fear of speaking out, and then making that the way she actually has to affect change, to be able to overcome her own personal problems with that, to change larger situations, was deliberate.

In a way, it was also me confronting one of my own weaknesses.  I’ve never been afraid to get up in front of people and talk but I’m very reluctant to share opinions.

As an adult, under the current political climate, I found myself feeling like it’s necessary to argue my position with people, to tell people what it is I do believe, and then be able to back it up. So, I felt that part of her (Amy Anne) is my wife, and part of her is me trying to understand that if I want to see change in this world, that I’d have to stand up for it and speak out for it.

This book is so inspiring and empowering in its message to young readers about their power to bring about real change.

How do you think kids can effect change at a grassroots level, particularly those who may live in communities that are intolerant to different viewpoints or dismissive of their perspectives?

Kids have a voice, and if they can find like voices and come together, they can really affect change.

We live in a country right now where we have to keep coming together and standing on corners and marching in parks to make people hear us…standing outside of Congress peoples’ offices, calling their offices and making them hear us. It matters and it works.

If I can give kids the tools now for how to protest or how to speak up, then hopefully that will be something that they have all their lives as a resource for affecting change.

Amy Anne and her friends certainly have a lot of fun coming up with silly challenges to show the absurdity in banning books based on them.

You used books that have actually been banned.  They are all banned from Amy Anne’s library by a well-meaning but misguided parent.

I think that books are a great, safe way for kids to confront challenging issues and difficult situations in the world. I would prefer that my own daughter run into drug use and sex and all that stuff in a book first, than when she’s inevitably going to run into that in real life.

As a writer, I have not shied away from putting those things in my books. When I was writing Prisoner B-3087, I told my editor, “Look, I’m writing a book about the holocaust for 8-12 year-olds.  I am not going to shy away from what really happened because, if I do, that does a disservice to people that were in the holocaust. And it does a disservice to these kids too. I need to show everything.“  And so I do.

I remember dealing with difficult issues at a really early age and not having the means to deal with it because no one ever talked to me about it. By putting difficult subjects in books, I hope that I’m exposing kids to things that they’re going to run into.  Hopefully, with some forewarning, they’ll have some thoughts and opinions developed, and maybe even some tools for how to handle that stuff.

There are so many: I’m a huge Harry Potter fan and one of my all-time favorite kids’ books is the same as Amy Anne’s: From the Mixed-up Files of Mrs. Basil E. Frankweiler.

I also love Dave Pilkey’s Captain Underpants series, and that’s one of the reasons I featured him heavily in Ban This Book.

Amy Anne doesn’t like them! She thinks they’re stupid. But I did that deliberately. I didn’t want my main character to love every book. That’s not the point.  That book could be somebody else’s favorite, and you could hate it. It doesn’t matter.  No book should be banned.