Cedarville University officials in Ohio confiscated and halted distribution of the independent student newspaper The Ventriloquist after it featured two essays critical of the school’s attitude toward gay students. “The Final Decision” tells the story of Avery Redic, who was removed from student government and other school leadership positions after coming out, and “Fear at Cedarville” seeks to open a dialogue between the gay and Christian communities.

Ventriloquist editor Zach Schneider described the scene to Generation Progress, the private nonprofit group that funds the publication: “[VP of Student Life Jonathan Wood] came up to me and said I didn’t have permission to pass out [The Ventriloquist] and he grabbed the copies from my hands. I let him have them because I didn’t want to get into a tug-of-war, but asked if I could have the copies back. He just told me they were being confiscated.”

The paper has been distributed on the Cedarville campus without interference since 2010. (And a reminder, it receives no funding from the college). So what could cause Wood to steal 400 copies from a student now? Cedarville’s Executive Director of Public Relations, Mark Weinstein, offered this explanation: “Our school has policies for soliciting and [students] need permission to distribute. It was checked and [The Ventriloquist] did not have permission.”

That policy hasn’t changed in the four years of Ventriloquist publication. What seems to have changed is officials’ interpretation of the word “distribute,” conveniently left vague in the student handbook, and the college’s overall doctrinal statement, which has become more conservative since new leadership took over last year. (The college no longer permits male students to enroll in Bible classes taught by women).

The Student Law Press Center, NCAC’s coalition partner and expert on the rights of college journalists, remarked on the challenge faced by silenced students at a private institution: “On campus at a private college, the First Amendment doesn’t come into play at all. It’s like a private business.” But the Center’s Executive Director, Frank LoMonte, says it’s “not uncommon at all for a private college to provide a free speech policy that gives students the bare minimum of protections for freedom of speech – beyond what the law requires. Beyond the law, the free and uncensored newspaper is essential to a college community.”

This is not the first time an open forum for students has been squashed at Cedarville. The Ventriloquist was created following the censorship of the official, college-funded student newspaper Cedars in 2009, which after running a series of columns on homosexuality and abortion, received complaints about “liberal articles” from university trustees.

According to Weinstein, the university “supports free thinking and discussions on topics.” For Cedarville’s gay students, many of whom are struggling to reconcile their faith with their sexuality, removing The Ventriloquist signals opposition to free thought and reinforces the opinion held by Wood that being gay is “spiritual instability.” The anonymous student who wrote under the sub-headline “I’m gay. Why I must live in fear at Cedarville,” said it bluntly: “Conservative Christianity doesn’t get a bad reputation for believing gay sex is a sin. Conservative Christianity gets a bad reputation because it refuses to understand the gay community.”

The role of any institution of higher education is to provide an environment of critical thought, discussion and inquiry, not indoctrination. For some, that means having a discussion on what it means to identify as Christian and gay without trying to change theological perspectives.

In the end, though, ventriloquists always hold the upper hand on their dummies. Cedarville students are able to access the paper online at http://theventriloquist.us. 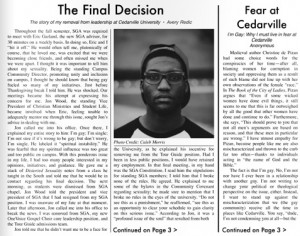