Over the past two weeks, protests at the University of Missouri and Yale have brought some core free speech issues into focus. Some see the student movements as clear evidence of a resurgent left-wing political correctness that is either indifferent or hostile to open debate. Others argue that the protests, at their core, are addressing institutional racism and the lack of diversity on campus, and the debate over free speech is a "distraction" from those substantive matters.

There is, of course, no reason that equality and free speech should be considered opposing values. But many have observed that, as Suzanne Nossel of PEN American Center put it in the New York Times, "proponents of social and racial justice and free speech advocates are talking past one another." 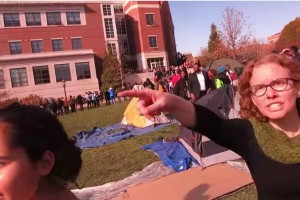 At Missouri, protests were focused on what some students saw as a pattern of racist taunts, a lack of faculty diversity and an administration indifferent to these concerns. The story became a free speech controversy when some students and one instructor attempted to block a student journalist from photographing a public gathering of protesters. That act provoked widespread condemnation, and student organizers changed course and spoke out in favor of access and press freedom.

At Yale, the protests were sparked by a controversy over Halloween costumes. The Intercultural Affairs Committee sent a notice that while the school "values free expression," it hoped that students would "actively avoid those circumstances that threaten our sense of community or disrespects, alienates or ridicules segments of our population based on race, nationality, religious belief or gender expression." 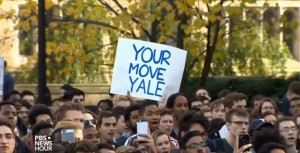 What caused the uproar was a response from associate master Erika Christakis. She questioned the necessity of such a warning in a follow-up email that outraged many, who saw it as belittling the concerns of students who feel marginalized. The protesters have stressed that the costume controversy is not the point; they are concerned with a host of larger, structural issues, and they are using their own speech to challenge administrators and faculty. Still, the video of some students screaming at a professor is suggestive of, at the very least, an unwillingness to engage in any discussion. The spectacle was unsettling, even to people who support their efforts.

There is a popular narrative that many college students do not respect or support free speech rights, because they prefer to be "coddled" or protected from ideas they find disagreeable. While it would be unfair to the student protesters to think that the actions of others are broadly representative of their views, it would be a mistake to brush off evidence of illiberal attitudes towards free speech as irrelevant. "It's time to stop pretending that these are isolated, random incidents," wrote Fredrik DeBoer, an academic who is supportive of the protests. 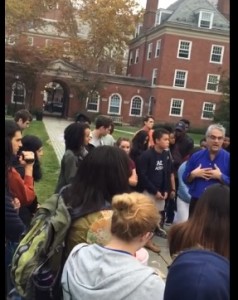 Indeed, in the midst of this controversy some attendees at a Yale free speech conference were spat on by protesters as they left. One demand of student protesters at another elite institution, Amherst College, called on the university president to denounce free speech flyers that appeared on campus, and to declare that the students who posted them "will be required to attend extensive training for racial and cultural competency." These examples—and many others— are evidence of what Michelle Goldberg calls "a striking authoritarianism" among some student activists, many of whom embrace "a dynamic in which being contemptuous of free speech arguments becomes a way to prove one’s radical bona fides."

However, equality and free speech are not at odds—or they shouldn’t be. Anyone sympathetic to the students demand for equality should recall the critical role of free speech and protest in the civil rights and women’s right movements. As University of Maryland president Wallace Loh argued, the challenge is "how to reconcile academic freedom and racial justice. The pursuit of truth and knowledge requires both." He added: "Spirited debate is essential to the pursuit of knowledge and truth. Students should learn the importance of openly and vigorously contesting ideas they oppose rather than seeking their suppression."

Contrary to the notion that debate is being stifled, students at some of the affected campuses are speaking up. A group calling itself The Committee for the Defense of Freedom at Yale has posted a letter, signed by hundreds, opposed to the anti-free speech sentiments of some of the activists: "When students are spat on and called 'traitors' and 'racists' for attending a conference on free speech, our civil discourse is at risk. When protestors make demands that would curb the expression of students and faculty, the quality of liberal education is in danger." At Claremont McKenna College, protests over Halloween costumes led to the resignation of the dean of students. In response, several hundred students have signed an open letter disagreeing with some of the tactics of the activists: "There was no room for discussion or debate at your rally, and voices opposed to yours were silenced."

Maybe one lesson will emerge: Free speech still works. But every once in a while, everyone also has to listen.