Censored on Campus: Paul Rucker’s Exhibition on Race in America

Previous Next
Censored on Campus: Paul Rucker’s Exhibition on Race in America

Paul Rucker‘s traveling exhibition REWIND is an urgently relevant multi-media installation that addresses the history of racial injustice in America. Works in the show include hand-sewn Ku Klux Klan robes made in colorful Kente cloth, images of lynchings, and slavery-era artifacts. The show opened at York College of Pennsylvania (Aug 31 – Oct 21, 2017) two weeks after the “Unite the Right” rally in Charlottesville, Virginia, which erupted in acts of violence that left three people dead. On September 5th, less than a week after REWIND opened, the college announced its decision to close the exhibition to the general public.

For the remainder of the exhibition’s run, access was limited to college students and their guests. The college announced the decision on its Facebook page: “The images [in Rucker’s work], while powerful, are very provocative and potentially disturbing to some. This is especially the case without the benefit of an understanding of the intended educational context of the exhibit. As a result, the college has limited attendance to the exhibit.” All traces of the show were scrubbed from the college website and an armed guard was put on duty in the galleries.

“We were trying to prevent any sensationalism,” the York College spokeswoman, Mary Dolheimer, told the York Daily Record. She added that the press was also barred from entry to the show, because “we knew that media coverage would bring more attendance.”

Paul has been touring REWIND since 2015 and says it has never encountered controversy or censorship before. He has just launched a Kickstarter campaign to help tour REWIND across the country.

For our inaugural Arts Advocacy Podcast, NCAC interviewed Paul about his work in general and this recent encounter with censorship in particular. (Click the link above to listen).

After our podcast, Paul answered a few lingering questions:

NCAC: Who invited you to install your traveling exhibition REWIND at York College?

Paul Rucker: I was invited by Matthew Clay-Robinson [the director of York College Galleries]. He’s the curator for the show. He first approached me after I gave a talk with a panel at MICA – Maryland Institute & College Art – in October of 2016. The contract [for REWIND] was signed early 2017. He is an amazing ally, producing thoughtful shows and encouraging engagement. He is a big supporter and advocate of my work and he adhered to administrative decisions to the extent that he had to, but advocated for greater access from the very beginning all the way through the end.

NCAC: Do you have a copy of the initial press release for the show that you can share?

Paul: They did not release one. The effort to bury the show was clear. It was the opening art show for the year. The printing of the brochure was delayed because there was concern about using my work on a brochure. My show and work were ultimately left out of the annual program booklet.

NCAC: Did the administration prevent public programs and student workshops you planned? You mentioned that the workshops were enthusiastically attended, especially after York closed your show to the public.

Paul: The opening artist talk happened, and a performance of live music with animation took place as well. I met with students before the performance for dinner; we had a great discussion. Mostly students of color that needed to let their feelings be known about how it feels to be on a campus in which they feel like they don’t have a voice. This gathering was coincidentally the largest gathering of people of color any of them had experienced since arriving on campus. The black student organizations were upset that they didn’t hear about the opening or the performance. Matt [Clay-Robinson] posted the internal announcement that went to students, and faculty, and was asked to remove it.

I came into the gallery and was available the last two days to give tours and answer questions. It was great. I met with a local high school class that came in for a tour. We sat in a circle and had discussion about the show. I also met with a journalism class. We also had wonderful conversations relating past events to current.

People from all over travelled in to see the show. Even the Governor’s wife visited the show. The restrictions brought many new people out.

When I present this work, community engagement is a must. That’s what made it really difficult. Using Charlottesville as an excuse for restricting. It should have been used as a reason for opening it up. 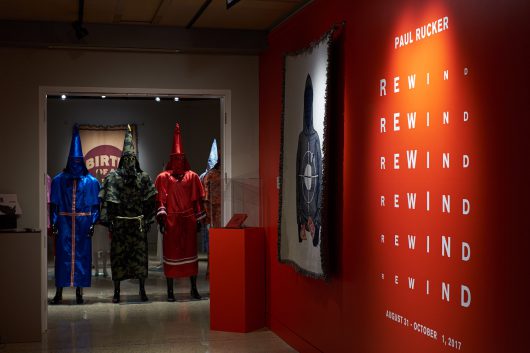 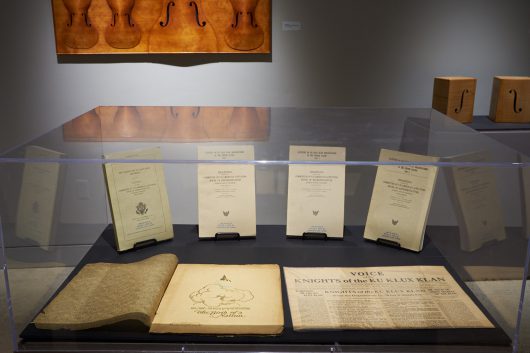 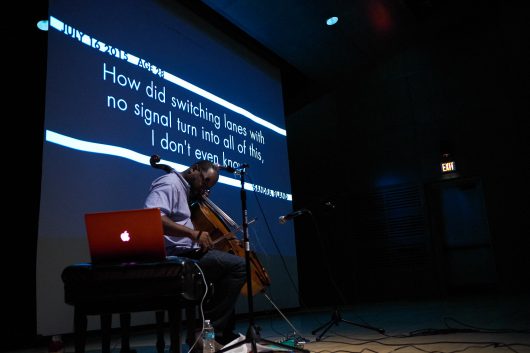 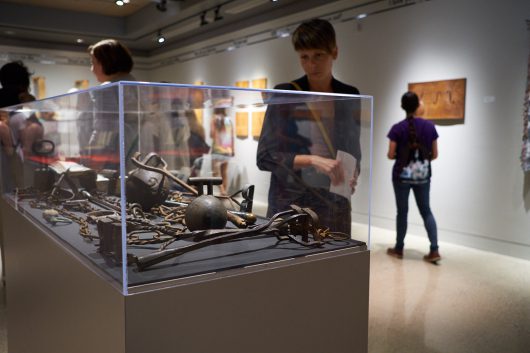 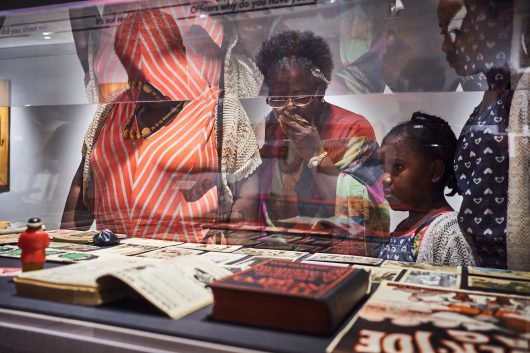 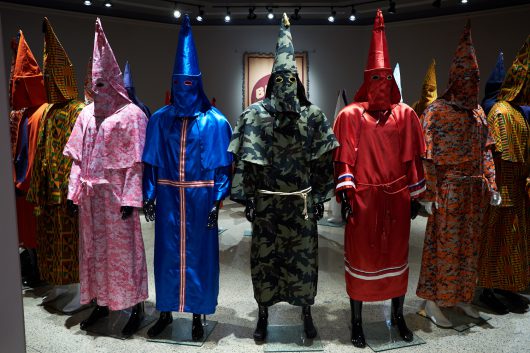 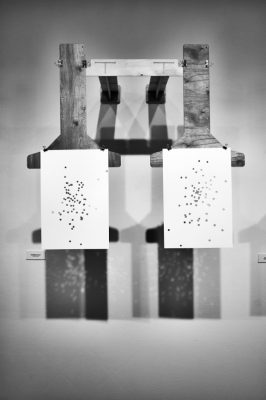 Paul Rucker’s REWIND Exhibition at the Baltimore Museum of Art: 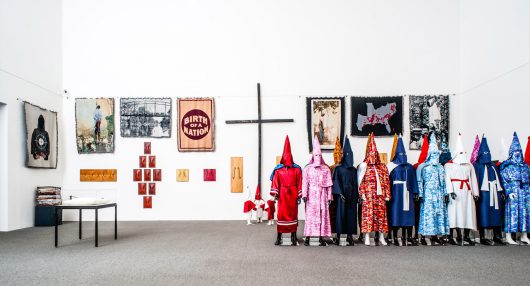 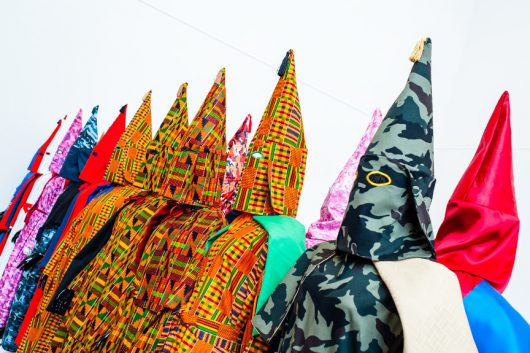 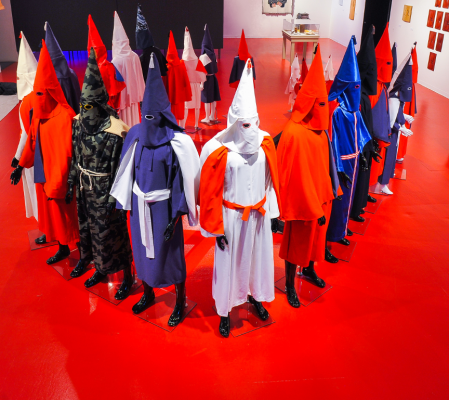 Paul Rucker is a multi-media artist and musician whose work integrates live performance, original music compositions and visual art as powerful historical narratives. Paul’s work, the product of extensive historical research, rich interactive processes and community engagement, investigates the impact of systemic racism on communities, basic human rights issues and the human emotions surrounding particular subject matter. Much of his current work focuses on the Prison Industrial Complex and incarceration in its relationship to slavery.

He is the recipient of multiple prestigious awards, including a Creative Capital Grant, and a Multi-Arts Production Fund Grant for performance, a Joan Mitchell Painters & Sculptors Grant, a Mary Sawyer Baker Award, an Rauschenberg Artist as Activist fellowship, and the Smithsonian Artist Research Fellowship, for which he is the first artist in residence at the new National Museum of African American Culture. Paul is a 2017 recipient of a Guggenheim Fellowship and he is currently an iCubed Visiting Arts Fellow at the Institute for Contemporary Art at Virginia Commonwealth University.
.
.