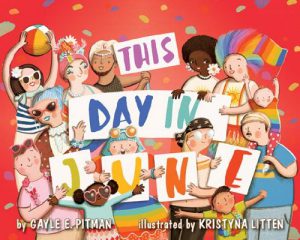 On Monday, scores of Chicagoans united to defend This Day in June, a children’s book about LGBT pride celebrations by Dr. Gayle E. Pitman, after a conservative religious group raised alarm about what they called LGBT “propaganda.”

The Illinois Family Institute, whose mission is “Boldly Bringing Biblical Perspectives to Public Policy” claimed the book contained “inappropriate” sexual content and launched a campaign to have the book removed from the West Chicago Public Library.

However, thanks to the outpouring of community support, the library district board issued an advisory recommendation to keep the book in the children’s section – a recommendation library management decided that same night to implement.

NCAC and 7 other organizations are praising the grassroots efforts of Chicagoans who have set an example for the rest of the country.

At the Monday night board meeting, the hall was filled over capacity as community members defended the right of kids to read stories about LGBT experiences.

“There’s no sex in this book at all,” said one member of the advocacy group Illinois Stop Moving Backwards. “There’s no vulgarity, no swearing. There is absolutely nothing negative in this book.”

Another supporter of the book recounted how books like This Day in June helped him survive suicidal thoughts during dark and isolating periods of his life as a young transgender person.

The 2015 Stonewall Book Award-winning book tells the story of a LGBT pride celebration and is recommended for ages 4-8 as “an excellent tool for teaching respect, acceptance and understanding of LGBT people,” according to a literary review.

LGBT-themed books are still frequently targets of censorship efforts. In Texas, an advocacy group called the Concerned Christian Citizens launched a campaign to remove a library display of books on LGBT issues set up for Pride Month.  Recently, in Indiana, lawmakers censored a library display of Beyond Trans: Does Gender Matter?

Check out our LGBTQ Right to Read Resource, and read the letter below; click here for a full screen view.