Previous Next
Controversy Around 89 year Old Statue in Queens, NY

Unveiled in 1922, Frederick MacMonnies’ Triumph of Civic Virtue was called sexist from the get go. And sexist it unarguably is (to an extent that it borders on a parody of sexism): Virtue is a club-wielding man, while Vice is two women being trampled beneath Virtue’s feet. 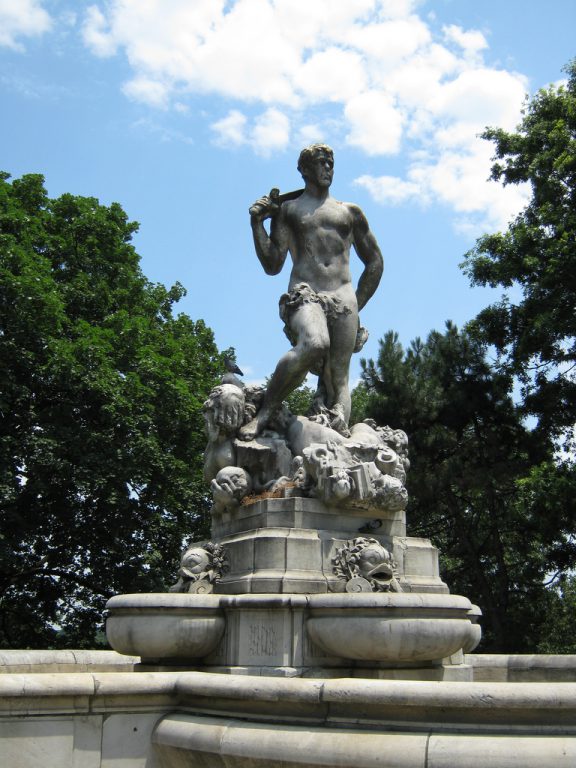 The statue stirred up so much public debate that the city held a public hearing on its propriety. At the hearing, Elizabeth King Black of the National Women’s Party interpreted the statue as one that exposed (rather than perpetuated), the subservient status of women: “Men have their feet on women’s necks, and the sooner women realize it the better!” In spite of protests, however, the statue remained in City Hall Park until 1941, when Mayor LaGuardia – reportedly tired of being mooned by the nude figure – had the sculpture moved to its current site in Kew Gardens near Queens Borough Hall. It’s been gradually disintegrating there while Community Board 9 has been trying get funding for its repair. For all intents and purposes it has been invisible – the paradoxical fate of many a proud public monument.

But now U.S. Rep. Anthony Weiner has brought new attention to the statue: he is on a campaign to get rid of it (sell it on Craigslist!), because it is “sexist.” Public monuments frequently become objects to such controversy: their stone or bronze grandeur appears eternal, yet times change, politics change, our values change and monuments frequently come to clash with the zeitgeist. So then what? Keep them around to remind us of the follies of the past of put them in a museum/sell them on Craigslist?

Dealing with historical public art requires a fine balance – we have no obligation to live with all the artistic choices of our ancestors, but we may want to keep them even when we don’t love them, because they tell the story of the past in a tangible way, they give us a glimpse of the values – and prejudices – of those who came before us and, finally, they put our own values in perspective.

In any case, decisions about permanently installed public art should be made carefully, weighing in the opinions of the entire community, as well as the history of the work, its aesthetic value, its importance to a particular place. Having one public official decide what stays and what goes based on his like or dislike of the ideas a work expresses looks a lit like censorship – today it is sexism that bothers Rep. Weiner, tomorrow his successor may be bothered by feminism, or nudity, or anti-war ideas, or anything else the politician of the moment decides will win him or her some easy political points.