Does The First Amendment Protect Citizens Who Film Police?

Previous Next
Does The First Amendment Protect Citizens Who Film Police? 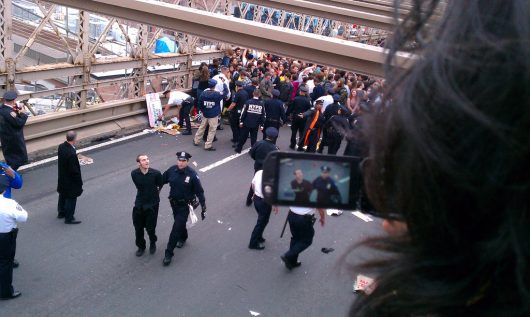 This news item caught NCAC’s attention last week: a lawsuit was filed in New York by an activist after he was arrested while filming three police officers talking to a man outside of a Manhattan pharmacy.

In the footage, the officers accuse the activist, named Ruben An, of obstructing the sidewalk. They proceed to handcuff Mr. An after he refuses to give the offices identification. Mr. An was charged with “obstruction of governmental administration, disorderly conduct and resisting arrest while filming an interaction with the police and another man."  His lawsuit claims that the arrest violated his First Amendment rights.

This report comes, coincidentally, at a time when videos taken by bystanders have shaped newspaper headlines across the globe. Last week, videos captured the shootings of Alton Sterling in Baton Rouge, Louisiana, and Philando Castile outside St. Paul, Minnesota, by police officers.  The shocking footage was soon eclipsed by images of the sniper attack on police in Dallas, which resulted in the deaths of five officers.  Witnesses used their cell phones to capture the shootout instantaneously, after which the footage was circulated widely online.

As a result of the readily accessible witness-filmed footage of the three events, millions of members of the public were given an immediacy to them. Stories like these wouldn’t have had the same impact if they had only appeared in print after the fact. But what are the consequences of consuming news in this far more tangible way?

As disturbing as it may be to view these images, they help us understand what is happening outside our immediate environment, and they allow us to experience the visceral impact it has on those involved.  Doing so not only increases our knowledge and understanding of these events, but it also encourages a nationwide dialogue on critical issues that might otherwise be, if not invisible, at least less compelling for many.

But do bystanders have a right to capture these kinds of events on film and make the videos widely available to the public at large?  That’s the question being asked in Mr. An’s case.

Although the relationship between the Constitution and those who film police officers has not yet been fully defined by the Supreme Court, most lower courts faced with similar situations have held that the First Amendment protects the right of members of the general public to film matters of public interest, including the actions of the police. Columbia Law School Professor David Pozen predicts that An's lawsuit will help secure "widespread judicial recognition of the First Amendment right to record on matters of public concern."

While some charge that viral videos heighten societal tensions, the national dialogue they have ignited on racial inequality, police brutality, and the challenges faced by the police is the better alternative to complacency and ignorance. But that doesn’t mean such videos don’t pose new challenges.  For example, do they tell the whole story? Not always.  Is it possible the videos incited violence?  Of course, it’s possible that some will claim the videos instigated their criminal behavior.  But criminals have also cited the Bible, cheerleading magazines, movies, and novels in the attempt to excuse their own inexcusable acts of violence.

It may be difficult to take the knowledge we gain from the video recordings of events and use it wisely, but that’s a task we must confront, given that this kind of citizen journalism is here to stay. Besides, the alternative is either to suppress information or to interpose “gatekeepers” to decide which images to allow, and which to ban. That’s the issue the First Amendment addresses: should the government be allowed to decide which ideas and images are good for us, and which are dangerous? With very limited exceptions, the Constitution has always protected our right to make our own decisions about what to see, read, think, and believe. The law holds us accountable for our acts, not our thoughts.  We would abandon that principle at our peril.