#Donttakeitdown: Students Speak Out Over Removal of Police Brutality Artwork

Previous Next
#Donttakeitdown: Students Speak Out Over Removal of Police Brutality Artwork

On Thursday June 11, photographs began to emerge on Twitter under the #donttakeitdown hashtag of a sculpture placed in the rotunda of Oxon Hill High School in Maryland. Two rectangular shaped boxes painted black are laid side by side atop the school crest. Roses are scattered on both with grey head stones that reads: “HERE LIES OUR FREEDOM OF SPEECH” and “Here lies Our Freedom of Expression”

"Our lives begin to end the day we become silent about things that matter." #OurVoiceMatters #donttakeitdown #OHHS pic.twitter.com/4Q4EPDmJrW 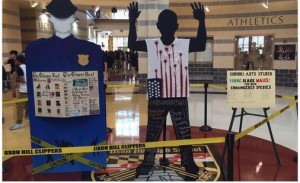 In the same rotunda a few weeks earlier, the Honors Arts Studio put up an installation: A mannequin painted white dressed in a blue uniform with a badge on the left chest. Attached to the torso of the mannequin is a newspaper that reads “Obituaries,” accompanied by photos of recently deceased black men and statistics about police brutality. To the side of the mannequin is a silhouette of a person with their hands up. The figure is wearing a white t-shirt painted on it are holes dripping red paint pooling in an American Flag.  On the silhouette’s lower body are written expressions pertaining to their shared anxiety of police brutality: “Stop Racial Profiling” one reads. 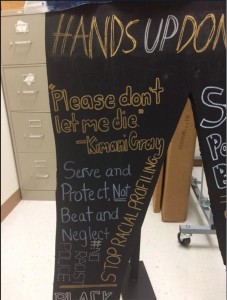 This piece was removed from the rotunda a few days before its planned de-installation. The Fraternal Order of Prince George's County Police, Lodge 89 posted a statement on their Facebook page explaining why they expressed complaints to officials:

The blood makes up the red stripes of an American Flag. To say the display was distasteful would be an understatement. In a time when relationships between law enforcement and certain communities are strained, this display does nothing to repair relationships.

There has been no official statement by the school made available to the public; the NCAC has requested one from the press office of the Prince Georges Country Public Schools.

This act of censorship has sparked great interest amongst the student body. A petition lists two demands:

1. Issue a statement in solidarity of the Oxon Hill High School students and their right to freedom of speech and expression; as stated to the 1969 Supreme Court ruling Tinker v. Des Moines.

2. We demand a process be implemented that allows students to appeal decisions that concern curriculum and censorship in schools.

It has also inspired peaceful action like this performance by the players of the school’s football team re-enacting the removed work,  referencing it with their living bodies by wearing white t-shirts similar to the removed silhouette:

The collective action has brought attention to the school board, where a hearing took place. And the students’ testimony has been drawing support on social media.

Although the removal of the work should never have happened in the first place, the management of the situation by the students and faculty members are exemplary and hopeful sign of the future.