Previous Next
He Said/She Said: That’swhatshesaid 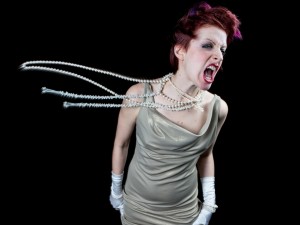 Accusing someone of copyright infringement is one way to silence unwanted critique. A cease and desist letter or a threatening voicemail — such tactics have become routine whether or not a given copyright infringement complaint has merit.
In early February, the one woman play That’swhatshesaid enjoyed a four-night run in the tiny venue at Gay City Arts in Seattle. Created and performed by Erin Pike and written by Courtney Meaker, the play consists entirely of dialogue culled from the most-produced plays of the 2014—2015 season. These include Bad Jews by Joshua Harmon, The Whipping Man by Matthew Lopez and 4,000 Miles by Amy Herzog, all published by drama lit mega-publisher Samuel French. In total, eleven plays were sourced to generate the script; Pike worked on the one hour-long piece for over two years.
That’swhatshesaid is, by all accounts, humorous and disturbing. By collaging together preexisting texts, quoting lines and toying with their contexts, the play takes on status quo perceptions of women and shines a light on the culture that perpetuates them.
One doesn't normally expect to see blowback for such a small production, but on the second night of the performance, several hours before curtain, Gay City Arts Executive Director Fred Swanson received a cease and desist letter from the licensing and compliance arm of Samuel French. They wanted to shut down the play. The letter claims that its use of copyrighted material, specifically from Bad Jews, is infringing.
Following the letter, Bruce Lazarus, executive director/vice president for Samuel French, called and left a voicemail on the cellphone of the play's creator and sole performer, Erin Pike. He claimed the production was "illegal" and said that Samuel French would "go after" Gay City Arts unless they cancelled the show. Here is a recording of that message:

What was Pike to do? People had already bought tickets — the 50-seat theater was sold out. She devised a plan. The show would go on, but to protect Gay City, she would redact all of the lines from Bad Jews.

In his article in The Stranger, Rich Smith describes what went down that Friday night:

That evening, 50 people crammed into Gay City's cramped and creaky auditorium. The small room was at capacity. The audience was murmuring and negotiating elbow room until suddenly through the speakers overhead a man's voice cut through the darkness and identified itself as Bruce Lazarus.

They were playing the voicemail he'd left on Pike's phone, the one that said the production we were all about to see was "illegal," and that Samuel French would "go after [their] presenter" if they went ahead with it. After the voicemail, silence filled the room. Then the sound of pages flipping. Then Pike appeared onstage. The spotlight hit her and she held her hands up to block her eyes from the intensity of the light. Then the light cuts out. Then the narrator voiced the first line of the play: “She enters.” She entered. The audience lost their shit.

The show went on. Whenever a line from Bad Jews came up, someone offstage would shout "redacted!" and Pike would go ahead miming the stage directions but not speaking the accompanying lines. The redactions led to moments of drama that hadn't existed before this external pressure from Samuel French.

"We were thrown this hurdle and we jumped it," Pike said after the show. Indeed, she had used a legal obstacle to her creative advantage, turning on its head the irony of silencing a one-woman play whose subject is the silencing of women.

Since that night, the creators of the play received two more cease and desist letters, one for lines it doesn't even contain. But is That’swhatshesaid in fact infringing anyone's copyright? Several parties have pointed out that the manner in which the play uses pre-existing content satisfies all the conditions of fair use: it is critical, transformative, innovative and parodic, and it doesn't hurt the market for Bad Jews or any of the other plays it mines for source material. The play is not infringing, which means the accusations are baseless. Rather, publishing titan Samuel French, and the authors whose plays it publishes, have threatened to shut down a tiny production whose message wrankles, criticizes and parodies them — all forms of expression that are explicitly protected by the First Amendment.

Watch this space for updates.