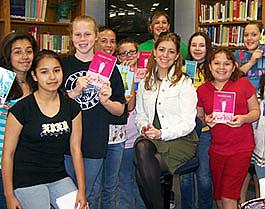 Rachel Vail is the author of over 30 books and short stories for children and young adults, including her most recent, critically-acclaimed, picture book, Jibberwillies at Night (2008).  A strong proponent of the freedom to read, Ms. Vail spoke with the Kids’ Right to Read Project about censorship and her experiences and responses to it as a writer.

Kids’ Right to Read Project: What are your experiences with censorship?

Rachel Vail: Recently, a school librarian refused to allow my picture book, Jibberwillies at Night, to be stocked or sold by the PTA at her school because she believed that a book that talks about children having worried feelings would cause children to feel worried.  Before this censorship issue with Jibberwillies at Night, I had only one book censored as far as I know.  That was my second book, Do-Over, which was about a 13 year-old boy.

Kids’ Right to Read Project:  Have these experiences affected the way you write?

Rachel Vail:  I was asked at the first school I ever visited as an author if my book (my first novel, which had just been published) had any “bad words” in it.  I said that I try to choose only the best words I can.  I started writing for teens with a pledge to myself that I would never sugar-coat or “adultify” how it feels to be mid-metamorphosis.  I try to keep that pledge every day.  But I do know that I self-edit now around word choice – do I really need to use this word that will keep this book out of clubs, fairs, and classrooms?  Is it essential, or could I get around it and still be true to the character?  I hope that I always come down on the side of truth, but it is hard to know.

Kids’ Right to Read Project: How have kids responded to your books that have been censored?

Rachel Vail:  If they know about the censorship, they tend to want to read the book more.  The more insidious kind of censorship quietly removes the book without a fuss or a discussion – and then, they can’t react at all.

Kids’ Right to Read Project: How has being a writer affected your understanding of what “censorship” means?

Rachel Vail: Before I was a writer, I thought censorship was a historical fact like slavery or polio – awful, and thank goodness now vanquished. I was honestly shocked to learn that all three still exist.

Kids’ Right to Read Project: Did you anticipate controversy over any of your books when you were writing them?

Rachel Vail: I have sometimes wondered what people would object to in my teen novels, since often a censor’s concerns seem so odd to me – a teacher who removed my book Do-Over from her school said it was because two minor characters, a boy and a girl who’d been going out for over a year at that point, had decided that if they were still together senior year they’d lose their virginity to each other, and the narrator thought that was cool.  This teacher objected that this thirteen-year-old boy narrator “never mentioned the possibility of teen pregnancy or the increased risk of cervical cancer among girls who have sex early or with multiple partners.”  That was honestly a sentence I’d never considered trying to wedge into his mouth.  I thought people instead might object to what he referred to with horrible embarrassment as his “constant stiffies.”

I never anticipated any controversy over Jibberwillies at Night because it is a book that reassures kids that it is normal to feel worried sometimes, and that you can lean on others, including adults who love you, for support and help when you do feel worried. Jibberwillies just never seemed at all controversial to me, which made this censorship situation particularly odd.

Kids’ Right to Read Project: If so, what is important about the controversial parts of your books?  Why is it important for kids to read this?

Rachel Vail: Borges said, “Reading is thinking with the mind of another.”  Reading can be both a window (there are other ways of being than my default!) and a mirror (I am not alone!) – and often the least comfortable truths are those that cut deepest.  We want kids to read, partly because of the transcendent epiphanies readers get to experience.  It is natural for those of us who love kids to wish we could protect them from shame, danger, sex, jealousy, fear, and death.  But the truth is, we ultimately can’t.  Reading helps us become resilient by giving us a chance to have experiences vicariously.  We want kids to be resilient, and empathic, and open to the world.  It takes some courage to let go enough to let them find their way.

Kids’ Right to Read Project: What would you tell kids at a school where books have been challenged or banned?

Rachel Vail: I would tell them to fight it.  I would tell them they have the right to get information and stories and opinions that might be uncomfortable, not just for censors to allow them to see but even for them to confront themselves.  I have told students that I believe in trusting them with a loaded mind – and that they need to maturely, politely, enthusiastically and adamantly fight for their right to read.

Kids’ Right to Read Project: What advice would you give to fellow authors facing censorship controversies?

Rachel Vail: I would suggest immediately contacting NCAC, and following their advice.