Join Us For the Rally Against Mass Surveillance Saturday!

Previous Next
Join Us For the Rally Against Mass Surveillance Saturday! 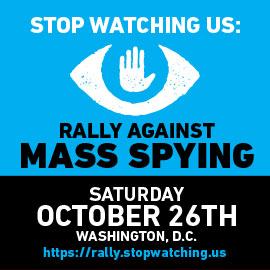 Right now the NSA is spying on everyone’s personal communications, and it’s operating without any meaningful oversight. Since the Snowden leaks started, more than 569,000 people from all walks of life have signed the StopWatching.us petition telling the U.S. Congress that we want it to the NSA accountable and to reform the laws that got us here.

THIS SATURDAY, on the 12th anniversary of the signing of the U.S. Patriot Act, thousands of Americans will gather in Washington, DC for The Rally Against Mass Surveillance, the largest rally yet against NSA surveillance. People just like you will join members of the StopWatching.us coalition, a group of more than 100 public advocacy organizations including NCAC,  to remind them that they work for us — and we won’t tolerate mass surveillance any longer.

Learn more about what StopWatching.us is doing to stop government snooping and about why we’re rallying here.