Previous Next
Just Like the Original, Teen-Lit Version of Homer’s “Iliad” Contains Sex, Gossip and Violence

…and this was a problem for the mother of a student in Pennsylvania, who recently lodged a challenge against Adele Geras’ Troy (Scholastic). The book was housed in the Northwestern Lehigh Middle School library and will stay there: the school board voted 5-4 to keep the book, in spite of the challenge.

Two things caught my attention about this story. 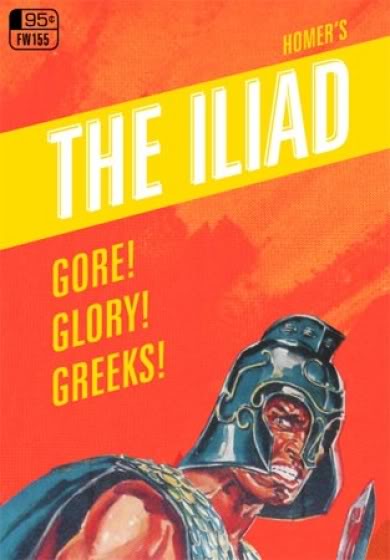 First of all, the student was not assigned this book. In fact, the assignment was to read ANY historical novel and write a paper on it. Any of hundreds. The student selected this particular book–a YA adaptation of Homer’s Iliad– himself, presumably because it piqued his interest.

This parent could have asked her son why he was interested in the book, what he thought about it, and applied her rights as a parent to engage him in a conversation about what she felt was “appropriate” or not. Instead of, or perhaps in addition to (benefit of the doubt), doing that, she wanted to ban the book from the middle school.

The second thing is the misunderstanding of the themes of Classical Mythology and literature in general:

Um, why do you think anyone still studies Latin? Or Middle English for that matter? What is mythology about if not extremely rapacious, incestuous, vengeful, petty, bitchy, violent gods and mortals in constant conflict with one another and themselves? Not only is that what mythology is about, that’s what makes it awesome.

And by awesome, I mean interesting and human.