Previous Next
Just Teach Books That Won’t Offend Anyone

There's a controversy at a 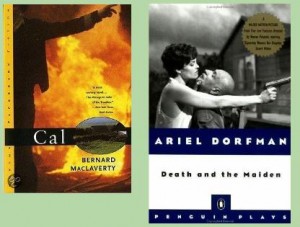 New Jersey high school over the teaching of two works that contain sex and graphic language. A parent started a petition demanding that Ariel Dorfman’s play Death and the Maiden and Bernard MacLaverty’s novel Cal be removed from the curriculum–as well as “any other material that is not age appropriate."

The Asbury Park Press weighed in with an editorial backing the parent's call for removing the books. As the paper put it, "It shouldn’t be difficult for school officials to find suitable alternative texts that won’t offend the sensibilities of parents or students." And, they added, removing books from the assigned reading list wasn't really censorship:

Some parents in the district believe that striking the books from the required list smacks of censorship. We disagree. Making the books optional rather than mandatory wouldn’t do that. And the books are, and would remain, in the school library, where students would be free to check them out. Where is the censorship in that?

The paper called this a "common sense" approach.

We respectfully disagreed, and wrote a letter to the paper arguing that this wasn't really common sense at all.

The letter ran in the October 11 edition of the paper; the full text is below:

Regarding the Oct. 6 editorial, “Explicit books in school should be optional,” the Press thinks it has found a “common sense” solution to the controversy over two books being taught at Rumson-Fair Haven High School: Stop teaching them, and limit the curriculum to material that “won’t offend the sensibilities of parents or students.”

Books are chosen by educators for their literary or artistic value. Telling an English teacher to only select books that offend no one would not only be impossible, it would raise serious constitutional concerns as well.

The argument that a book that is still on the library shelves hasn’t been “censored” misses the point. Removing a book from the curriculum in response to individual objections means privileging the beliefs of a few over the entire community. Educators are trained to guide students through difficult material; that is lost when the books are removed from the classroom.

So let’s hear what the students and educators at Rumson-Fair Haven say about how these works have been used in the classroom before we tell them they shouldn’t have read the books at all. It could be a teachable moment.