Previous Next
My First Protest: Exercising My First Amendment Right 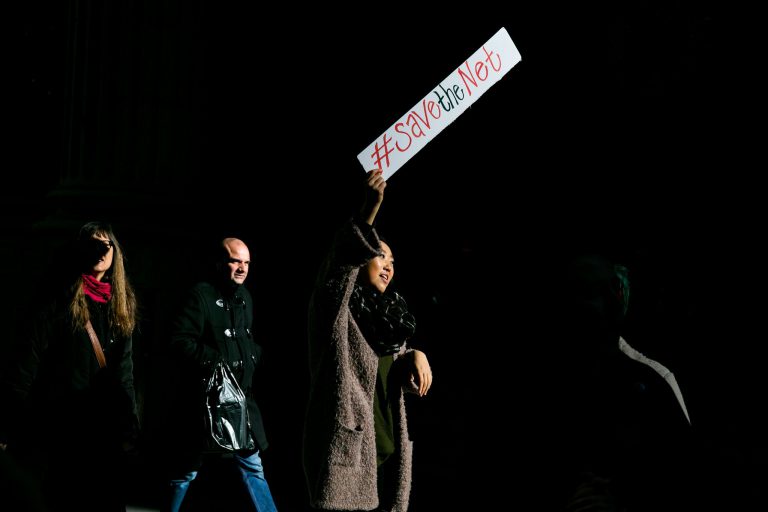 I have never been much of a talker. As I sit in classroom discussions, I am not the one engaging, but the one listening and trying to understanding each side of the argument. I was the bystander who stood on the sidelines, watching for what would happen next. I thought there was no place for me to participate in these talks because I’d never been so passionate about an issue compared to others who had louder voices. But as I stood at my first protest last week, I finally felt like my voice was being heard.

Net neutrality is about the open internet, where internet services provide access to all legal content and applications without favoring sources or blocking others. For our generation, the internet is one of the greatest means of communication and a hub of infinite information. To see this idea turn upside down is so ironic because our advancements are retrograding. In moving forward, we should have more freedom – not a system blocking us from what we can and cannot see.

As I stood between the towering office buildings in the center of Wall Street, I felt intimidated and insignificant in the crowd. But as I stood in a small group knowing we were all fighting for the same rights, that we all believed in internet freedom enough to gather here, I felt like I was not alone. Although the protest was small, the determination the protesters maintained pulled me along with them to give my all to our community.

I’d seen endless postings on social media about net neutrality but I never thought I, Jessica, would be using my voice to fight for it as well. You really don’t know the feeling of fighting for your rights until you take that leap. Being the protester, rather than the passerby, is a totally new feeling.

It was a little awkward to fit in at first but as soon as one of the protestors welcomed me to the crowd, I felt appreciated. The reason I have never thought about joining a protest was because I was intimidated by being the subject of weird glares or turning heads. I feared people judging me. But from the protester’s side, I learned that grabbing someone’s attention was a good thing, and the weird glares were actually looks of curiosity. Being in the moment of this protest made me get out of my own insecurity. When you actually integrate yourself in protesting, you truly begin to understand why people do it.

Being involved is impactful, and educating passerbys about what you’re standing up for is very important. If you, as an individual, feel like you can’t make a change, even if you want to, I can definitely assure you that by standing with others your voice can be heard a thousand times better. As I now know I can stand in a crowd and not feel alone, I knew this protest won’t be my last.