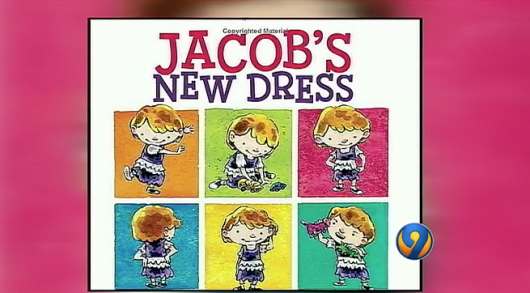 The National Coalition Against Censorship (NCAC) and 6 other organizations committed to defending the right to read are urging a North Carolina school district to reinstate a children’s book in a 1st grade anti-bullying lesson plan after it was removed following pressure from local Republican lawmakers concerned about its gender-nonconforming themes. The groups express concern that political and ideological motivations were behind the district’s decision to remove the book.

The book, titled Jacob’s New Dress, was written to promote support and understanding for gender nonconforming kids. It tells the story of a boy who chooses to wear a dress to school and stands up to school bullies. The book was selected by the Charlotte-Mecklenburg school district as part of an “age appropriate” lesson plan intended to teach young students about how to tackle bullying and harassment. The decision to use the book is reflective of a Board of Education policy to draft curricula “embracing our community’s diversity.” After Republican legislators found out about the teaching of the book, however, they relayed concerns to the school district, who subsequently pulled the book from the lesson plan. The District’s government liaison said a decision to continue to teaching the book would have been like “poking the bear.”

NCAC’s letter expresses serious concerns that political power was used to meddle in school curriculum based on the teaching of ideas that are ideologically unpopular. The letter notes Jacob’s New Dress is critically acclaimed and selected by professional educators in accordance with the district’s educational goals. It stresses that efforts to purge disfavored material from school curricula “violate the spirit of the First Amendment.”