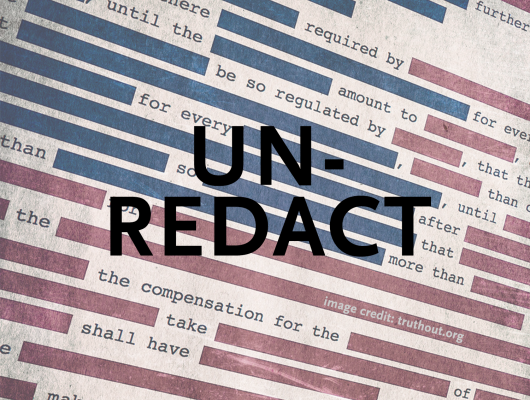 The National Coalition Against Censorship has joined with 35 other organizations, including Free Press, ACLU and Color of Change, in calling upon the Department of Homeland Security (DHS) to release its unredacted memos known as the “Race Paper” and the “Growing Frequency of Race-Related Domestic Terrorist Violence.”

The Race Paper’s existence came to light recently as part of a Freedom of Information Act (FOIA) request, but the document itself was released in entirely redacted form. However, DHS’s recently filed declaration indicates that the document was intended to survey growing trends in domestic terrorism driven by race-related “extremist” ideologies and address the coopting of peaceful protests by violent ideological actors. The declaration also reveals that DHS believes it has identified common indicators displayed by those engaging in domestic terrorism. Given what the declaration reveals about DHS’s focus on racial identity as it relates to domestic terrorism, we believe that the Race Paper may improperly suggest that constitutionally protected Black political speech should be considered an indicator of criminal conduct or a national security threat. A flawed analysis of this type would have serious implications on the constitutional rights and safety of Black and Brown people in the United States, and, in particular, protesters and activists of color.

The U.S. government has a long history of monitoring activists of color. The public has a right to know whether the Department is improperly using race or constitutionally protected political activity as an indicator of violent behavior. Withholding the documents only contributes to lack of public trust and confidence in the Department.

You can read the full letter below. Click here for a full screen view.