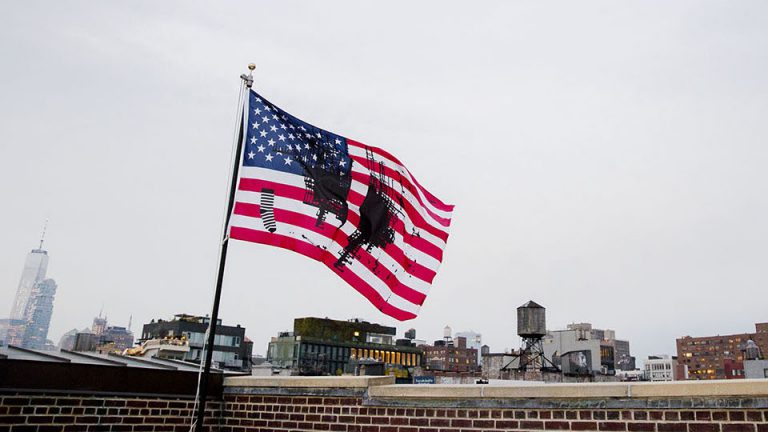 NCAC has joined the Foundation for Individual Rights in Education (FIRE) and the American Civil Liberties Union (ACLU) of Kansas in a letter to the University of Kansas (KU) strongly urging it to take a stand against censorship by restoring a public artwork that the university removed last week. The artwork, “Untitled (Flag 2),” by artist Josephine Meckseper, is part of a nationwide public art program, “Pledges of Allegiance,” organized by Creative Time and featuring 16 artworks that incorporate flags that address a variety of themes and topics by artists around the world.

The joint letter is addressed to KU’s Chancellor Douglas A. Girod, who immediately succumbed to pressure from Kansas Governor Jeff Colyer and Secretary of State Kris Kobach when they demanded that KU remove the flag because they found it offensive. Girod removed the work from its outdoor location and placed it inside the Spencer Museum of Art, which is part of KU. He later issued a statement.

The joint letter reminds KU that as a public institution it is obligated to protect the First Amendment rights of its students and faculty. It states that by acquiescing, Chancellor Girod “sent a clear message to the KU community and would-be censors that the institution will capitulate to complaints regarding the content and viewpoint of expression on campus.”

NCAC had initially responded to the flag’s removal in a separate letter urging Gov. Colyer and Sec. of State Kobach to reverse course and encourage KU to replace the artwork in its original location, thereby upholding their commitment to the First Amendment.

Read the full letter below; click here for a full screen view: