On Sunday, Dec 21st, NCAC joined Secret Cinema and Spectrum to screen Charlie Chaplin’s The Great Dictator in protest against the cancellation of The Interview.

As NCAC noted in a statement regarding the cancellation, threats of violence have become increasingly successful in suppressing cultural expression. Before Sony Pictures Entertainment withdrew its film, The Interview, from all outlets of circulation and distribution, we saw London’s Barbican shut down an art installation and a Paris gallery remove a photograph, both because of fear of violent reactions. Other cancellations of screenings (Trey Parker and Matt Stone’s 2004 satire Team America) and film productions (Steve Carrell’s Pyongyang, a paranoid thriller about a Westerner’s experiences working in North Korea) in the US are already happening, deepening the stranglehold of self-censorship on the whole industry. 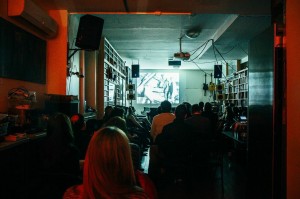 Every time threats of violence succeed in silencing expression, others are encouraged to use the same method to restrain free speech. When fear’s dominion over the imagination tightens it stifles our very ability to fully explore the world and our place in it.

The worldwide screenings – in Rome, London and San Francisco besides New York (Brooklyn and Manhattan), profiting international free speech group Article 19, are a statement against fear and censorship. The Manhattan screening, hosted by Spectrum, a technology-intensive site for innovative music, multimedia and art, located on the Lower East Side, benefited NCAC. 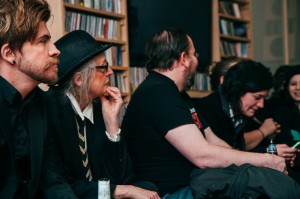 The history of The Great Dictator provides uncanny parallels to the present situation: conceived in 1938 as a satire on the rise of Hitler, the film faced controversy and fears that it would offend Germans! Censorship was likely. By the time the film came out in 1940, however, the Second World War had broken out and concerns about offending Germany were somewhat attenuated… Do we need to tailor our cultural offerings to comfort repressive regimes and out-of-control dictators?

And some food for thought: while the answer to the above question has been a resounding NO, when it comes to offense claimed by other social groups, our collective dedication to free speech often wilts. What gives?