No no, a cartoon, naked man in it, no, Apple won’t have it

Previous Next
No no, a cartoon, naked man in it, no, Apple won’t have it

Take a look at this panel from an iPad graphic novel app based on James Joyce’s 20th century classic, Ulysses.

There is a part in the story where a character, Buck Mulligan, strips down and jumps in the Irish Sea for a swim. Here it is in Joyce’s original:

He nodded to himself as he drew off his trousers and stood up, saying tritely:
–Redheaded women buck like goats.
He broke off in alarm, feeling his side under his flapping shirt.
–My twelfth rib is gone, he cried. I’m the _Uebermensch. Toothless
Kinch and I, the supermen.
He struggled out of his shirt and flung it behind him to where his
clothes lay.
–Are you going in here, Malachi?
–Yes. Make room in the bed.
The young man shoved himself backward through the water and reached
the middle of the creek in two long clean strokes. Haines sat down on a
stone, smoking.

The graphic panel was censored by Apple, who forced the artists to make edits in the iPad app. Why? According to Section 3.3.18 of the iPhone Developer Program License Agreement, Apple reserves the right to reject any application that, through Apple’s own “reasonable judgment,” may be considered “objectionable.” Now reasonable judgments do vary, but a cartoon male with a teeny willy??? We can see big trouble ahead where the Ulysses plot gets thicker. Just think of the graphic rendition of this rather famous passage:

I was a Flower of the mountain yes when I put the rose in my hair like the Andalusian girls used or shall I wear a red yes and how he kissed me under the Moorish wall and I thought well as well him as another and then I asked him with my eyes to ask again yes and then he asked me would I yes to say yes my mountain flower and first I put my arms around him yes and drew him down to me so he could feel my breasts all perfume yes and his heart was going like mad and yes I said yes I will Yes.

It looks like you would likely have to plow through the notoriously complex prose – Apple is not likely to let any graphic representations of Molly’s sexual ecstasy soil your eyes.

UPDATE: Apple’s censors have decided to lift their ban on the webcomic of Ulysses.  The publishers of the comic, Throwaway Horse, received a call from Apple on Monday, June 14th.  They were told that the censors had taken a second look at the panels in question and realized that there was nothing obscene in them.  According to Throwaway Horse, Apple apologized and asked for the authors of Ulysses Seen to resubmit the comic for approval. Hopefully, it will be ready in time for the revelers to read it Bloomsday. 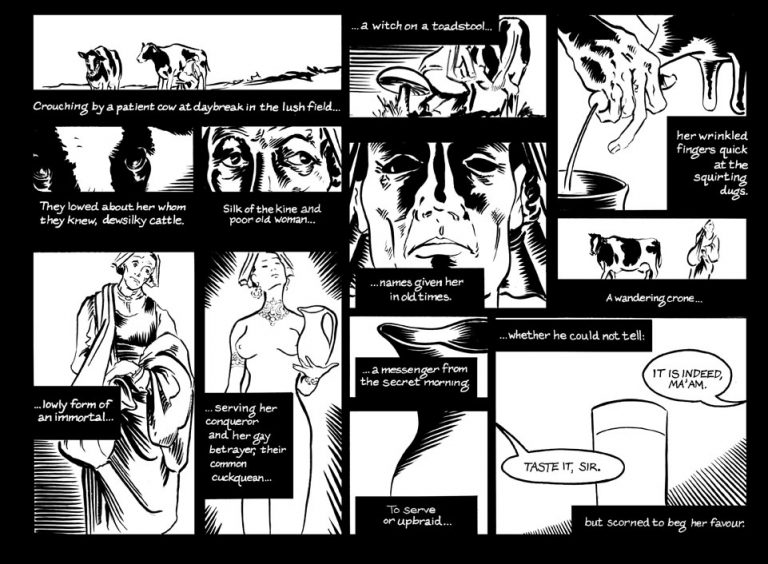 Apple has also decided to lift its censorship of another graphic novel adaption app, Oscar Wilde’s The Importance of Being Earnest.  The company had originally decided to censor this app due to the depiction of two naked men kissing.  Even though there was no frontal nudity, the censors only approved the comic only after the men were covered by black boxes.  On the heels of reversing their policy for Ulysses Seen, however, Apple also allowed The Importance of Being Earnest to be resubmitted for approval without the black boxes and called the comic’s rejection a “mistake.”