This week, a spokeswoman for the school system has claimed that the word “censorship” was inappropriate, as teachers could still assign the book so long as they were willing to sit through a class on how to teach such “sensitive material”. These extra classes appear designed to create an incentive against assigning “Persepolis”.

The graphic novel, written by Marjane Satrapi, is an autobiographical account of growing up in Iran during the fall of the Shah and the ensuing revolution. Unknown Chicago officials declared the book’s scenes of torture were inappropriate for students, despite an overwhelming student approval of the book.

Chicago students were outspoken in their disapproval of knocking “Persepolis” from their schools. “The book actually tells us what happened during the Iranian Revolution,” said one. Another noted that, “the truth of the book is not much different than what kids see in their neighborhoods every day.”

“They think kids are stupid,” Satrapi noted in an interview on the ban. “They are not babies. Children are not dumb.” Satrapi herself witnessed the depicted episodes of torture and violence as a young girl, the same age as the students who would be affected by the ban.

The irony of a narrative focusing on a dictatorship which relentlessly censored its citizens getting banned is uncomfortably clear to almost everybody, the exception of course being the censorious officials who banned the text in the first place. 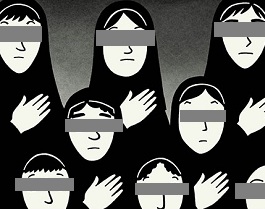