Public Speech at the Mercy of a Heckler’s Veto 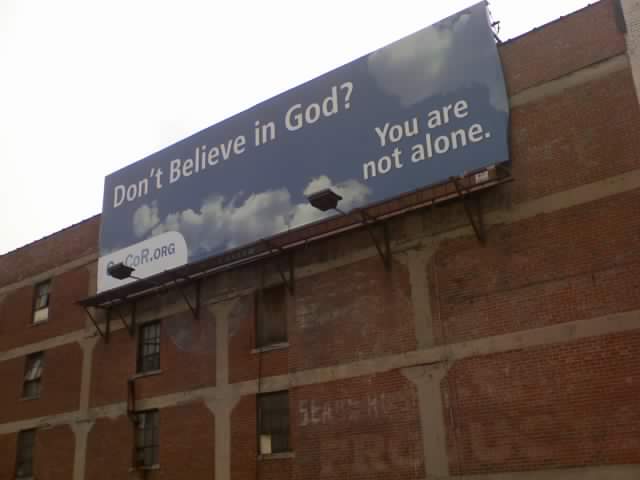 A billboard with the words “Don’t Believe In God? You are not alone” was removed from a site in downtown Cincinnati because of threats received by the owner of the site. Even though both the freedom of religion (including the freedom to not believe in god) and freedom of expression are among the founding principles of the U.S., there are still people who are prepared to resort to unlawful behavior so as to silence speech they dislike.

Of course, faced with material that confronts our beliefs and unsettles our emotions, the first impulse is to want it suppressed by any means available.  The need to coexist in a diverse society, however, demands that we resist the impulse to use violence as a way of silencing those who outrage us. That does not mean that we should be mute in the face of ideas that offend us.  There are many channels to voice one’s anger that do not include threats of violence.

To the extent that our society harbors such violent intolerance, it invites untold others who are convinced of the moral rectitude of their cause to adopt similar tactics. Every time threats of violence succeed in silencing expression, fear’s stranglehold on the imagination tightens, stifling our very ability to fully explore the world and our place in it.

The controversial billboard has been moved to a new location on the 6th Street Expressway, U.S. Highway 50, which is owned by the advertising company itself and should not be vulnerable to threats. Nevertheless it is lamentable that most public space seems to be at the mercy of a threatening heckler’s veto.