The online virtual environment Second Life headlines the latest censorship scandal: they took down an art exhibit because SL community guidelines do not allow nudity unless it is confined to a space that has a “mature” or “adult” rating.  The work in question was an installation based on Rose Borchovski’s Susa Bubble, an anthology of machinema films following the surreal, emotional adventures of a young girl. 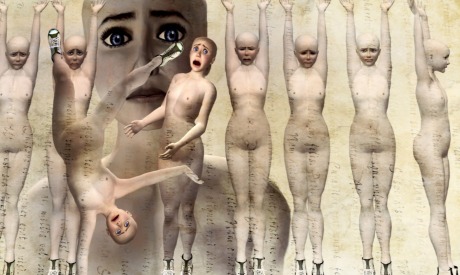 One has to wonder as to what Linden Labs found so objectionable about this still from the film.  The figure here is slightly more anatomically correct than a Barbie doll and definitely less sexual.

It is somewhat idiotic that a virtual world environment, which states as its objective to be “free and open” and which has become a fertile ground for the development of new art experiments, should censor the almost weirdly asexual creatures in this image. But, as Borchovski says, “The worst part of censorship is not that which is censored, but the climate of self-censorship it imposes on all artists. Art is about having a voice. Art is about thinking differently and about thinking from fresh perspectives. When artists are not allowed to have a voice, culture is not allowed to progress.”

Filmmaker Peter Greenaway wrote a letter to Linden Labs in support of Borchovski.  “Like any self-respecting artist of course I am against gratuitous exploitation that demeans and insults intelligence and sensibilities but by your blanket censorship you are now doing both those things – insulting artistic intelligence and demeaning sensibility.”

This is not the first time Second Life has censored artwork.  A few years ago, a virtual statue called Burning Life, an homage to Burning Man, was censored because it was a statue of a nude woman.  For other examples, go to the pavilion of The Virtual Coalition Against Censorship, a Project of the Arts Program at the NCAC, to see more examples. The pavilion is on Commonwealth 3 (103, 81) (Click here to be teleported). No wonder SL’s population is dwindling –artists would no more want to create for a repressive political regime than for a virtual world with medieval restrictions on content.