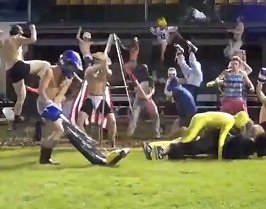 Everyone appears to have jumped on the meme wagon, firefighters, people in offices, division I sports teams, the Dallas Mavericks, the Norwegian army, Pepsi—even the cast of the Today show. And, before any of these adults took out their flip cams, teens and college students were, naturally, leading the charge.

A more disturbing phenomenon, however, has been administrator response to a number of these videos made by high school students. For high schools students across the country, creating or participating in a 30-second dance video has meant suspension from school and expulsion from extra-curricular activities for dozens of students.

Well, we think that’s a problem and we have something to say about it. (Read our statement here.)

What about these videos is causing such alarm amongst administrators? Even the parents of some suspended students have expressed confusion or consternation when schools have been quick to pull students out of school. In most reports, school or district leaders have provided almost no explanation for these suspensions; others have accused students of “disorderly conduct” or “obscene behavior.”

The dances in these Harlem Shake videos may be considered raunchy by some viewers, but they are not obscene by any legal definition. They are harmless, filmed in good fun and either participate in or comment on a global, if passing, internet trend. Administrators seeking to punish students for making Harlem Shake videos demonstrate little understanding of the students in their school or teens nationwide.

In many cases they are student-athletes, student leaders, respected by their peers and teachers. Far from meaningless, these suspensions will leave a mark on each student’s permanent record and may require explanation when they apply to colleges in the future.
What’s more, these punitive actions infringe on students’ free speech rights to express themselves and join their voice – or dance in this case – to the thousands of others online.

Suspending students also sends them the wrong message about creative collaboration. Rather than encouraging students to band together and create content in an entirely innocent, constructive way, schools are saying, don’t organize, don’t collaborate, don’t participate – or else.