Previous Next
Tampon photo incites controversy at the Fashion Institute

“FIT endorses the right of artists to freely express their views through their work” reads a sign at the beginning of a student photography show on display in one of the institute’s lobbies. The sign also warns that artwork may be inappropriate for some people. That didn’t stop the Dean from requesting that a photograph by Jessica Chow be covered up. The work is composed of a number of seemingly used tampons on a bright red background. No other images in the exhibition are covered, in spite of the fact that they sometimes contain disturbing material like a woman’s face bearing traces of violence.

In a recent blog post about this incident, Chow describes her disappointment, saying:

I really need to put this on my priority to-do list, fight censorship at this school I am at.  I do not know what I am going to do/how/etc, I have attempted to start however, and I really do damned hope I keep this going.  This should be a nice first project for me as a newly accepted advertising/marketing student right?

Even though the photograph has not been entirely removed from the show, the act of covering it up is a classic act of censorship. The flap – which may be taken as an intended part of the work as there is no sign explaining its appearance – completely changes the message of Chow’s piece and suggests there is something possibly obscene/shameful/indecent about the image. 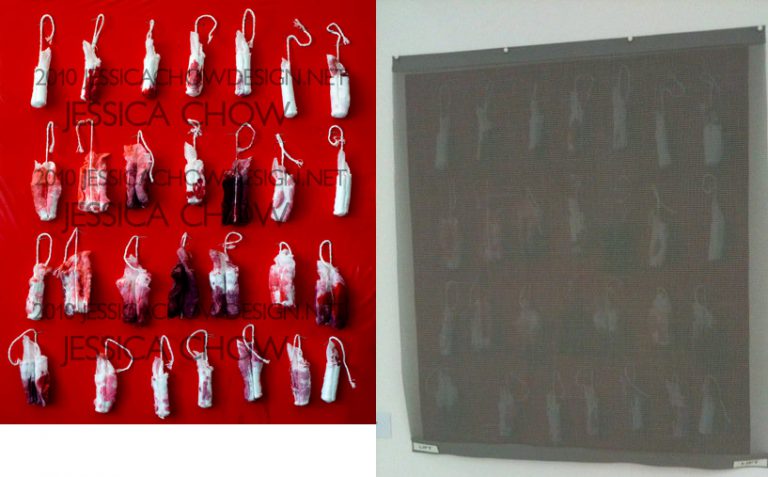 Chow also criticizes the school’s squeamishness towards her subject:

and like many people who saw my piece have said “this is an art school, are you kidding me?!”  So much hypocrisy.

The work in question is clearly not obscene (it is not even sexual). In fact, there is a long tradition of art work that shows – without shame – objects that are part of women’s daily lives (Judy Chicago’s Red Flag is one of the most well know of these works).

As an educational institution, the Fashion Institute of Technology should uphold principles of academic freedom in the classroom as well as in showing student work. Its administrators should reconsider their decision to treat an image of tampons – ordinary enough objects – as shameful and dangerous. There should be flaps over every image in the student show or over none of them.