Tatted: Art on the Body is Protected Expression

Previous Next
Tatted: Art on the Body is Protected Expression 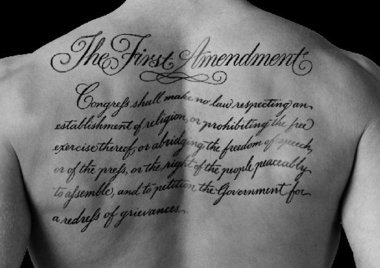 Did you know that in some states, localities have health and safety ordinances prohibiting tattoos and tattooing? You may be surprised to know that even New York City, birthplace of the modern tattoo — had a ban for 36 years.

Now that practically anyone–from our own mothers to elementary school teachers–is likely to have one, bans like these seem like remnants of a bygone era.

In some sense, they are. In the past decade, as tattoos became increasingly mainstream, the courts overturned a number of these ordinances, upholding First Amendment arguments that tattoos and their creation are expressions of “pure speech.” Today, one in five adults has a tattoo in the U.S.

In place of prohibitions, we now have health and safety regulations to ensure the clean and safe practice of tattooing and the prevention of the spread of diseases like hepatitis.

In Temple, Texas, however, the law against tattoo parlors remains alive and well, much to the dismay of tattoo artist Christopher Simmons. Simmons has been fighting to get the ordinance overturned. A Temple native, Simmons moved back recently and wants to be given the opportunity to support his family with his trade and express himself through his art.

“I love this place and I consider it my home and I would love to work here,” Simmons said. “I feel that my rights are being taken advantage of a little bit because of my lack of opportunity to work.”

For more information on the courts and tattoo ordinances, see NCAC.org.