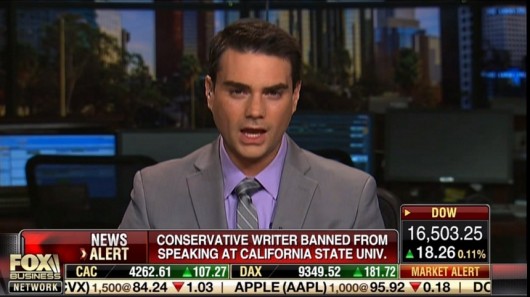 UPDATE: College president William Covino apparently reversed his decision, and Shapiro showed up to speak. And so did protesters, as a local news outlet reported:

According to tweets by Shapiro, protesters blocked entrances to the University Student Union where he was speaking, attempting to obstruct those who wished to attend. Cameras captured shouting and pushing as intense interactions occurred between protesters and those attempting to attend the event.

After speaking for about an hour, Shapiro tweeted he had to be escorted by police from the campus for safety concerns.

Ben Shapiro might be speaking at a college campus in Los Angeles today–that is, unless the president of the school can successfully block him from doing so.

The Young America’s Foundation student group at the California State University of Los Angeles (CSULA) had scheduled a talk with the conservative writer for this afternoon, titled "When Diversity Becomes A Problem." As you might expect, some students don't care for Shapiro's views, and some of them were planning a counter-rally. But then the president of the school, William Covino, stepped in to announce that Shapiro couldn't speak at all, or at least not as the event had been planned by the student group:

After careful consideration, I have decided that it will be best for our campus community if we reschedule Ben Shapiro’s appearance for a later date, so that we can arrange for him to appear as part of a group of speakers with differing viewpoints on diversity. Such an event will better represent our university’s dedication to the free exchange of ideas and the value of considering multiple viewpoints.

People expressing different points of view is a pretty good illustration of the free exchange of ideas; that's exactly what seemed to be happening already. As FIRE's Peter Bonilla points out, Covino's decision could put the public university in legal trouble: "It seems quite clear, for one, that the cancellation of the event is motivated by a distaste for Shapiro’s views. This is unconstitutional, as the Supreme Court has repeatedly held."

Just as unconstitutional is Covino’s decree that Shapiro’s speech is only fit to be heard if there are opposing speakers and viewpoints on hand. If CSULA wants to have its own event and invite Shapiro to be part of a diverse panel of speakers, it is free do so. But it’s a clear violation of YAF’s First Amendment right to freedom of association to force the group to include speakers opposed to Shapiro’s message as a condition of hosting him on campus.

Shapiro has said he plans on showing up to speak anyway, and the story is making national headlines. It's not the only such example. Williams College in Massachusetts has something called the “Uncomfortable Learning” series, which attempts to bring unpopular ideas to campus. That's easier said than done, apparently. Last year students protested a scheduled appearance by Suzanne Venker, who was going to give a talk called “One Step Forward, Ten Steps Back: Why Feminism Fails." Amidst the controversy, the group that had selected her rescinded the invitation.

And then on February 18, college president Adam Falk decided he was "taking the extraordinary step" of canceling a speech by far-right commentator John Derbyshire. He did so while simultaneously expressing his support for free speech:

Free speech is a value I hold in extremely high regard. The college has a very long history of encouraging the expression of a range of viewpoints and giving voice to widely differing opinions. We have said we wouldn’t cancel speakers or prevent the expression of views except in the most extreme circumstances. In other words: There’s a line somewhere, but in our history of hosting events and speeches of all kinds, we hadn’t yet found it.

We’ve found the line. Derbyshire, in my opinion, is on the other side of it. Many of his expressions clearly constitute hate speech, and we will not promote such speech on this campus or in our community.

What's especially revealing–and perhaps even encouraging–is that the student responsible for the speaker's series, Zachary Wood, responded to the news by explaining that he chose him precisely because he does not agree with him:

I radically disagree with John Derbyshire on many of his views. Indeed, Derbyshire has said offensive, even hateful things about minorities, things to which I take exception. That is precisely why I was looking forward to exposing the flaws in his arguments. If every student does not desire the intellectual challenge of defending their own ideas against those they find objectionable, that is perfectly fine (anyone can choose not to attend the talk). However, for President Falk to deny Williams students that opportunity by disinviting the speaker was not merely injudicious, but undemocratic, irresponsible, and frankly, pathetic.

Shapiro responded to the news by denouncing the "campus fascists," "jackbooted thugs" and "precious snowflakes" who don't like hearing views they disagree with. But in this case, and at Williams, administrators are the ones stepping in to make determinations about which speakers are suitable to be heard on campus, overruling the students who selected them in the first place.