When the Cure is Worse than the Disease: A Review of HATE by Nadine Strossen

Previous Next
When the Cure is Worse than the Disease: A Review of HATE by Nadine Strossen 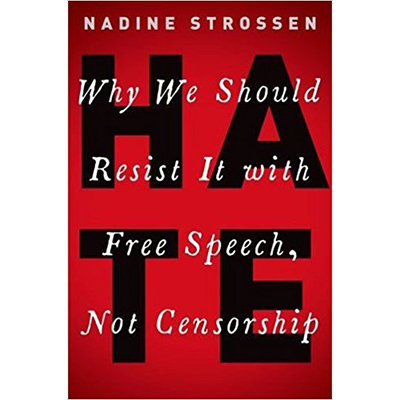 A review of Nadine Strossen’s Hate, due out May 1st from Oxford University Press.

Nadine Strossen, law professor and former American Civil Liberties Union President, is a charismatic voice on the thorniest of free speech issues, from pornography to hate speech. Her timely new book arrives as we regularly read about the “line between free speech and hate speech” and campus battles rage over the right of alt-right speakers to have a platform to spew racist messages.

Indeed it is those campus battles that have inspired Strossen to address a subject she has been speaking and writing on since 1977, when the ACLU made a principled but unpopular decision to defend the right of neo-Nazis to march in Skokie, a predominantly Jewish suburb of Chicago. The book takes its references from Skokie but addresses the present generation of students and activists concerned about social justice and racist speech. Opposing broad anti-hate speech laws and celebrating “counterspeech”, Hate argues that “equal justice for all depends on full freedom of speech for all.”

Strossen provides an accessible overview of the debate over hate speech regulation. While admitting the emotional pain and social harm words can cause, she argues that such harm is mediated by personal experience and circumstances and that banning speech because it causes pain or promotes negative values can lead to suppressing a very large swath of expression.

To illustrate how broadly and randomly hate speech laws can be applied, Strossen uses examples from Europe, where such laws are prevalent: Bob Dylan was charged with “incitement to racial hatred” in France for appearing to compare Croatians to Nazis; an Iranian-born Danish politician was penalized for criticizing Islam; and many others.

If these laws did, in fact, combat racism, a few random applications (generally corrected by the courts), would not be a problem. However, Strossen cites numerous studies showing that hate speech laws have done nothing to combat hate and racism. In fact, support for xenophopic and racist politicians has risen rapidly in many European countries with strong hate speech laws.

Worse than ineffective, Strossen argues, a ban on such speech could be counterproductive to equality and non-discrimination. These laws, in practice, tend to suppress the speech of precisely those disenfranchised minorities they are supposed to protect—little wonder, as these groups, by definition, lack the power to implement the laws. Indeed, hate speech laws have been routinely abused to stifle dissent in countries from Russia to Kenya to Singapore.

So can nothing be done to combat the cesspool of hatred? On the contrary, Strossen claims. Dispelling hate and discrimination is better achieved through countering hateful ideas, not by legislating against their expression.

It is this counterspeech that has a record of achieving a lasting change of belief, not banning speech through legal means. Speaking up to counter hateful ideas also builds resilience and claims power for the target groups, contrary to protective strategies that generate a sense of victimhood. Of course, speaking up against hate and racism is not only the responsibility of its targets; it is demanded of all of us.

One is left wishing that Strossen had trained her incisive mind on some of the most debated current issues rather than just mentioning them in passing—issues like online content regulation by private social media platforms, the spread of fake news, and the shift from a scarcity of voices (and the importance it gave counterspeech) to a world in which everyone has a platform and speakers easily drown each other out.

Nevertheless, Strossen has written a clear and forceful polemic that deserves a wide audience. The book brilliantly revitalizes a classical liberal argument about the importance of countering bad speech with more speech, not enforced silence. 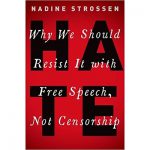