Previous Next
Wisconsin Parks Department Bends to Will of Radio Host, Bans Play

SummerStage will not be performing their “diabolical” play at Lapham Peak State Park in Wisconsin as previously scheduled, as a right-wing radio host put the fear of God in The Department of Natural Resources. The Progressive reported the DNR pulled “The Bible: Complete Word of God, Abridged” after evangelical clergyman Vic Eliason dedicated an hour-long radio rant calling for them to ban the “blasphemous” work. 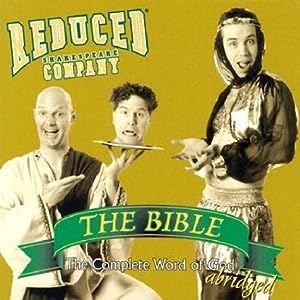 A little bit about “The Bible: Complete Word of God, Abridged“:

The work was written by the Reduced Shakespeare Company as a light-hearted take on The Bible in the style of Monty Python. It affectionately laughs with, not at, the faithful and Bible-familiar. According to SummerStage founder Brian Faracy, the play has been performed in churches, community centers and even at the Kennedy Center in Washington, D.C. with nary a peep or problem. You can watch theater troupe trailers on YouTube to give you a better idea of the tone and content.

Here’s an example of the type of joke we’re dealing with. Moses comes down from the mountain and addresses the crowd:

“Children of Israel, I’ve got good news and bad news. The good news is I talked Him down to 10. The bad news is adultery is still one of them.”

The DNR claims they were in the right in cancelling the play, as it did not hold to the agreement that it be family friendly. The play was being advertised as being for audiences 13-and-up in part because many jokes would go over the heads of younger viewers.

Prominent members of the theater community in Wisconsin are speaking out against the censorship of the play, which has found a new venue at The Next Act Theater. David Cecsarini, founder of Next Act, wrote an open letter to other artistic directors in southern Wisconsin:

“What might happen when we produce something that actually merits attention because it does indeed take on controversial subject matter? I believe we all have a stake in this, as producers, as artists, and as citizens.”

We’re glad that some artists and directors are willing to speak up, rather than allow the opinion of a single radio host to condemn theater to silence. And if you’re reading in Wisconsin, check out the performance yourself performed by SummerStage.