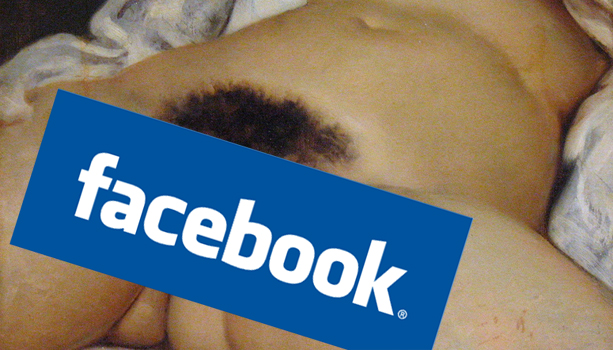 It turns out that the enclosure of the World Wide Web into propriety social networks like Facebook has a downside, as the global art community is discovering. Facebook’s reviewers have repeatedly disabled accounts for posting images of Gustave Courbet’s iconic 1866 painting, “The Origin Of The World”, a frank and naturalistic portrait of a woman’s genitalia.

(NCAC also attempted to post the image…it was removed and we received a warning that continuing to post it would result in a ban.)

The bans have instigated an uprising, and this isn’t the first time Facebook’s content “standards” have been utterly blind to artistic merit. In January, the social network insisted upon removing illustrated nudes from the New York Academy of Art’s page, prompting some pointed questions about Facebook’s self-appointed curatorial duties.

Facebook has become a de facto town square for much of the planet’s online population. Problem is, it’s not a town square or anything akin to public space. Rather, Facebook is more like a shopping mall: privatized, corporate space run by a security force that can kick you out just for looking funny.

For most people, life in the mall is great. It’s well-kept, there are always new products to ogle and, besides, all of your friends are there! As we saw in Egypt, people can use Facebook to create big changes in the world. But this recent outbreak of prudishness only highlights the fact that everyone from small businesses to social uprisings are increasingly dependent on a platform where the Terms Of Service currently treat us as consumers, not citizens. It is up to us to organize and motivate Facebook to create policies that more closely approximate our expectations of protected speech.