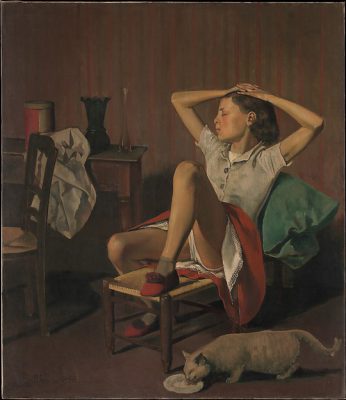 New York, NY, 12/4/2017— The National Coalition Against Censorship (NCAC) strongly supports The Metropolitan Museum of Art’s refusal to remove a painting that some critics believe depicts “the sexualization of a child.” The painting, Thérèse Dreaming, a 1938 painting by Balthus, is part of the museum’s permanent collection. More than 10,000 people have signed an online petition demanding its removal in response to “the current climate around sexual assault and allegations that become more public each day.”

Balthus, an important figure in twentieth century art, is known for his ambiguous depictions of adolescents who dream or read in rooms closed off to the outside world. Thérèse Dreaming shows an adolescent girl reclining on a chair, eyes closed, one knee raised in a sensual, and to some, suggestive position.

Historically, the female form, both clothed and nude, has been one of the central subjects of art across cultures. It has also generated frequent protests and warnings against its corrupting influence. However, attacking art is counterproductive to the open discussion necessary for us to confront the realities of sexual harassment and abuse.

The protesters’ claim that displaying the painting implies institutional approval of an unhealthy sexualization of young women also fundamentally misconstrues the role of cultural institutions, which is to facilitate a diverse public’s engagement with a rich array of cultures and objects by framing and contextualizing them.

Recent cases of censorship, including the threats of violence that forced the Guggenheim Museum in New York to remove several exhibits, reveal a disturbing trend of attempts to stifle art that engages difficult subjects. Art can often offer insights into difficult realities and, as such, merits vigorous defense. NCAC applauds The Met’s refusal to bow to its critics. We will continue to support cultural institutions that allow members of the public to make up their own minds about what is “offensive.”