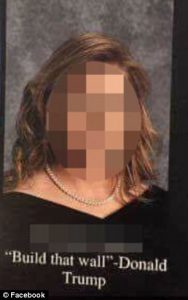 New York, NY, 5/15/2017- As an organization committed to defending student free expression, the National Coalition Against Censorship (NCAC) is criticizing a North Carolina high school’s decision to cancel the distribution of its graduating classes’ yearbook because a student chose “Build that wall!” as her senior quote, attributing the words to President Donald Trump. NCAC argues the decision fails the school’s educational goal of preparing students to effectively encounter controversial opinions and its commitment to First Amendment principles.

After the yearbook was published, administrators at the Richmond Early College High School found several of the senior quotes inappropriate. The principal, Tonya Waddell, subsequently reclaimed the handful of books that had already been distributed and cancelled any further distribution. Announcing the decision on Facebook, the school claimed they had discovered “errors” and “inappropriate comments” in the books. Currently, the only “inappropriate comment” known is the Donald Trump quote, which students at the school had previously called racist and hurtful on social media. The school’s Facebook post claimed the district “would not tolerate inappropriate conduct toward any of our students.” The school has since announced no Richmond student will receive a yearbook this year.

NCAC underlines that shielding students from controversial opinions on important issues, like immigration, leaves them ill equipped to deal with disagreeable perspectives they will inevitably encounter in day-to-day life. A public school, the letter argues, has a responsibility to prepare young adults “to exercise the responsibilities of citizenship by promoting democratic values such as free expression, tolerance, and diversity—including diversity of opinion.” Becoming an adult means living without the protection of authority figures, and thus young people must learn to face offending ideas and opinions with reasoned debate rather than censorship.

“While schools have every right to take measures against inappropriate conduct directed at any student, the First Amendment protected expression of a political opinion does not fit this category,” said NCAC’s Director of Programs Svetlana Mintcheva, “We urge the Richmond Early College High School to distribute the yearbooks as planned.”