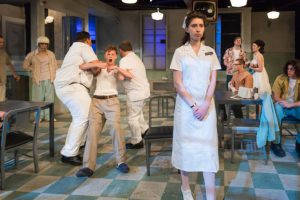 New York, NY, 5/10/2017- As an organization dedicated to defending creative expression, the National Coalition Against Censorship (NCAC) is urging the Boston Children’s Theatre (BCT) Board of Directors to reinstate its Artistic Director after his suspension following his refusal to remove a scene containing nudity in a production of One Flew Over the Cuckoo’s Nest. NCAC argues that creative decisions are for the Artistic Director to make, and must not be compromised by the moral qualms of a few community members.

Burgess Clark, who has been the Artistic Director of BCT for nine years, chose Cuckoo’s Nest because it is both a classic and widely read at the high school level in Boston Public Schools. The play enjoyed a full run in late April, and was a critical and box office success. Despite this success, and the fact that audiences were adequately warned of the play’s adult language and brief display of nudity ahead of time, two board members demanded that Clark remove the scene containing nudity for the play’s final performances. Clark refused, saying he would resign rather than remove the scene. He is currently indefinitely suspended until the board can make a decision regarding his employment.

NCAC argues that keeping children from viewing artistic representations of nudes does not ‘protect’ them; rather, it imposes the religion-based view that the nude human body is shameful. As a matter of fact, children encounter representations of nudes in many public places, from museums to city squares. Historically, nudity has been one of “the central subjects of art, and the beauty of the human body has inspired painters, photographers, sculptors and choreographers for many centuries.” The U.S. Supreme Court has stated on multiple occasions that simple nudity (that is not sexually explicit) is constitutionally protected expression.

“Calls to censor artwork containing nudity for the sake of ‘protecting’ children are, of course, nothing new,” said NCAC’s Arts Advocacy Program Associate Joy Garnett. “However, select individuals’ sense of morality and decency cannot be imposed on an entire community and an Artistic Director’s ability to produce creatively rigorous productions of artistically valuable work.”