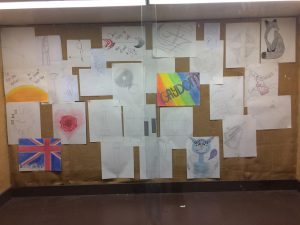 New York, NY, 4/26/2017- The National Coalition Against Censorship (NCAC) and Lambda Legal are calling on a Tennessee high school to apologize for removing a displayed student artwork featuring the word “GAYDOM” and a rainbow motif. The groups demand the drawing be immediately restored, arguing that the school’s justification for the removal– that some students were offended by the artwork– violates the student artist’s First Amendment rights.

A student at Volunteer High School, part of the Hawkins County School District in Tennessee, created the work for display in a case in the art classroom. The art teacher did not impose any requirements or constraints on subject matter for the work. The work was on display for two weeks before some students lodged complaints about it, prompting the Vice Principal to order its removal. Despite protest from the student artist, the school administration refused her request for permission to restore the piece. The school administration justified its response by claiming the work “disrupted the learning environment”, i.e. that students had a negative reaction to the use of the rainbow gay pride symbol in the artwork.

The two groups stress that the school’s decision fails its student’s First Amendment right to non-disruptive free political and artistic expression by granting a “heckler’s veto” for student artwork. Artwork that broaches political or social issues will inevitably provoke impassioned responses, particularly in the area of gay rights, which remain controversial for some. The correct response to controversy around an artwork, however, is discussion and education around the issues at hand. Resorting to censorship, the letter notes, only serves to suppress student’s civic engagement and understanding of sociopolitical issues.

“It is extremely concerning that the incident appears to constitute a case of blatant discrimination against a pro-LGBT viewpoint,” said NCAC’s Youth Free Expression Program Associate Josh Zuckerman. “At a time when anti-LGBT sentiment remains prevalent in our high schools, censoring a pro-LGBT message works to further stigmatize students who articulated them.”

“We need school officials to stand up for LGBTQ and allied students—not participate in bullying them,” said Hayley Gorenberg, Deputy Legal Director of Lambda Legal, a national nonprofit that works to achieve and defend the rights of LGBT people. “Censoring student art because it includes LGBTQ-affirming content sends just about the worst message a school could send. It tells vulnerable young people that the adults in charge don’t have their back. And it tells all students to suppress diversity of expression and controversy, instead of encouraging those values, which are part of the bedrock of a free society.”