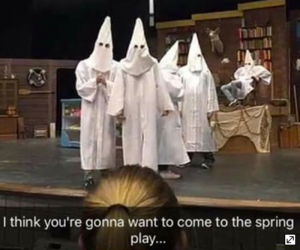 New York, NY, 4/19/2017- 3 organizations committed to defending free artistic expression, the National Coalition Against Censorship (NCAC), the Dramatists Guild and the New School’s Arts Integrity Initiative, are urging a Minnesota school to reverse its decision to cancel a production of the comedy The Foreigner after an image of student actors dressed in Ku Klux Klan costumes was spread online. The groups argue that the cancellation missed an opportunity to “create a richer educational context” around the play.

In March, Minnesota’s New Prague High School’s student production of The Foreigner, a popular comedy about an Englishman’s interactions with the KKK in Georgia, was cancelled after a photo spread online of students dressed in the Klan’s infamous white robes. The photo, which was shared on Snapchat with the caption “I think you’re gonna want to come to the spring play”, caused offense and concern among community members about the play’s portrayal of the racist group. The play was subsequently cancelled a week before it was due to be performed. Although the Klan is depicted in the play as foolish, and the play’s message is one of acceptance and the celebration of difference, the director told NCAC that because of the photo controversy, the performance “would not have resulted in a positive experience for any students.”

The groups maintain that although the school should and must aim to create a positive learning environment free from racism and hostility, the decision to cancel the play fails to further this objective. The letter recommends the school postpone, rather than cancel, the play and use this incident as an opportunity to discuss and criticize its ideas, thereby alleviating concerns about the Klan’s portrayal and providing a lesson about issues that continue to have lingering effects on America today.

“The decision to cancel the play sets a dangerous precedent for future performances that feature content and characters some students may find disturbing,” said NCAC’s Youth Free Expression Program Associate Josh Zuckerman. “The Sound of Music and The Producers both feature Nazi characters, for example, and the decision to cancel The Foreigner suggests these plays are educationally unsuitable for a school production.”