Blacks & whites who wrote about racial injustices in the turbulent 1800s were often times the victims of violent acts. Some examples:

Elijah Parish Lovejoy was a Presbyterian clergyman who was well known for his opposition to slavery. He founded the St. Louis Observer which he often used to rail against the evils of slavery. Beseiged by pro-slavery protests, he moved across the Mississippi River to Alton, Illinois and founded the Alton Observer. After his equipment was destroyed a few times by angry rioters, he was murdered in 1837 while attempting (unsuccessfully) to stop a mob from, once again, destroying his printing press. This incident reverberated across the country and helped galvanize anti-slavery sentiment at the time. 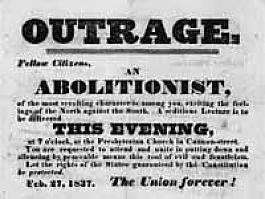 This handbill urging opponents of abolitionists to obstruct an anti-slavery meeting demonstrates the depth of pro-slavery feeling. Although the handbill advocates peaceful means, violence sometimes erupted between the two factions. An emotion-laden handbill was a factor in the well-known Boston Riot of October 21, 1865. In that incident, a mob broke into the hall where the Boston female Anti-Slavery Society was meeting and threatened William Lloyd Garrison's life.
Image and text taken from "The African-American Mosaic: A Library of Congress Resource Guide for the Study of Black History and Culture"

In 1892, as a journalist and part owner of The Memphis Free Speech, Ida B. Wells penned a scathing editorial that defended several black men that she felt were wrongly accused of raping white women. After it was printed, the office of the paper was attacked and equpment was destroyed throughout. Wells, who was in Philadelphia at the time, was warned via a note left by the mob to not return to Memphis. Wells didn't return but continued to write and crusade against lynching. Later, she became one of the founding members of the NAACP.