NCAC provides this guide as a resource for librarians. We will make updated copies available as changes are made. If you have suggestions, or would like to request a printed copy, please email us 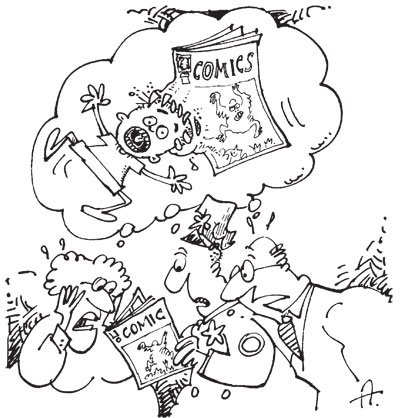 Graphic novels are one of the fastest growing categories in publishing and bookselling. Today’s graphic novels are far more sophisticated and varied in content than the comics that preceded them and enjoy a level of respect previously denied to this form of popular entertainment: they are the subject of reviews, book-length surveys, museum exhibits and academic study, as well as recipients of prestigious literary awards (Art Speigelman’s Maus, for instance, won the Pulitzer Prize in 1992). As the U.S. News and World report phrased it, “The comic books of our youth [have] grown up.”

While comics are published as magazines, their “grown up” version – the graphic novel – appears in book format. Sometimes graphic novels bring together a series of comics (much like Dickens’ novels came out of serialized narrative); at other times they are conceived as novels and exhibit novelistic features such as character development and multiple story lines. Although still mostly targeted at youth, graphic novels are increasingly of interest to an expanded audience, which includes many adults.

Narratives composed out of visual images or out of images and words have a very long history – a history that stretches back to the first cave paintings. Today’s graphic novels, however, are a singular product of the 20th century. In their combination of text and image they are closest to another major 20th century medium – film. Not surprisingly there is a rich interchange between the two – film technique informs graphic novels and, in turn, many filmmakers base their work on comics or graphic novels (not only Batman and the X-men, but also Ghost World, American Splendor, A History of Violence, Art School Confidential, and many others).

Combining visual art (a sense of space, mass, motion, and color) with literary and cinematic techniques (plot, point of view, character development, metaphor, allegory, flashbacks and flashforwards, speeding and slowing time, close-ups, long views, stream of consciousness, montage, etc.) graphic novels contain some of the most creative work in publishing today. They promote visual and verbal literacy, as well as love of reading. A good collection of graphic novels appeals to young people who might otherwise be reluctant to explore the library.

The immediacy of graphic novels’ visual impact coupled with adult themes and concerns, however, sometimes confuse library patrons used to thinking of comics as the province solely of 10 or 12 year olds.The explosive growth of the medium combined with the appearance of more and more graphic novels for older teens and adults presents some unique problems for librarians.
The diversity of graphic novels makes categorizing and shelving them an especially challenging task. Shelving all graphic novels together, for instance, has occasionally led to parents complaining that their kids have mistakenly picked up an inappropriate book due to its proximity and visual similarity to books targeted at older teenagers or adults. However, reading communities differ, as do library collections. We hope the guidelines we offer here help librarians make the best decisions in serving the specific needs of their patrons.

The guidelines are intended to help in collection development; categorizing and shelving graphic novels; and handling complaints.

A Brief History of Graphic Novels

The juxtaposition of words and pictures stretches back into antiquity (think about ancient Egyptian wall paintings, which surround human figures with dense lines of hieroglyphs), though the current vocabulary of the form began to take shape with the rise of the comic strip. Popularized in newspapers at the start of the 20th century, the comic strip introduced the fundamentals of the comics language — such as the use of balloons for thoughts and dialogue, and panel to panel narrative progression — that persist to this day. The work of many visionaries of that period, including Winsor McCay, George Herriman, E.C. Segar, and Frank King is now preserved in popular archival editions. In a parallel development, the 1920s and 30s saw a revival in the woodcut narrative tradition in the work of Franz Masereel, Lynd Ward, and Milt Gross, whose “silent” 1930 comic He Done Her Wrong was recently reissued to popular acclaim.

Comic book traditions have many national variations. The American comic book took shape in the late 1930s with the introduction of Superman and his successors Batman, Wonder Woman, Captain America, and a plethora of others. Arriving at the tail end of the Depression and during the first rumblings of World War II, comics provided cheap, thrilling entertainment that appealed to youngsters and soldiers alike. Comic books became an integral part of the entertainment culture, with the popular heroes spinning off serials, radio programs, and movie features. As the medium progressed, it encompassed a wide variety of genres including romance, horror, crime, science fiction, war, humor, and adventure.

Comic book sales soared into the millions after World War II. As the audience grew, so did pockets of sophisticated content. Will Eisner’s formally audacious The Spirit, for instance, circulated as a comic book supplement in national newspapers aimed at a well educated readership. In the early 1950s, the success of EC Comics’ horror, science-fiction, and war titles marked a high point in comics art and storytelling.

However, by the mid fifties, the medium suffered a setback: the anti-comic book hysteria whipped up by Frederic Wertham’s book, Seduction of the Innocent, culminated in Senate hearings on Comics and Juvenile Delinquency. Worried about the possibility of government regulation publishers toned down their content and formed a self-regulatory body, the Comics Code Authority. The CCA prohibited depictions of gore, sexuality, and excessive violence, as well as scenes with vampires, werewolves, ghouls or zombies. It also mandated that authority figures were never to be ridiculed or presented disrespectfully, and that good must always win. EC comics dropped most of its comics. Comics rebounded by the early 1960s, however, with DC Comics reinvigorating many of its classic heroes for young audiences, and Marvel Comics capturing adolescent and college-age imaginations with a new brand of comics storytelling.

The late sixties brought the most immediate antecedent to the content of today’s graphic novels, Underground Comix, self-published or small press comic books, which disregarded the restrictions of the Comics Code. Born from the era’s counterculture, Underground Comix dealt unflinchingly with the social issues of the day, including attitudes about sex, race, war, and drugs. Its greatest practitioners are today revered as some of the century’s most noteworthy artistic voices, most notably R. Crumb, Art Spiegelman, Gilbert Shelton, and Harvey Pekar.

The creative freedom afforded by Underground Comix and changes in distribution that allowed material without the Comics Code seal of approval to find an audience, opened the door for the graphic novel to emerge. The term “graphic novel” was popularized by Will Eisner’s 1978 short story collection, A Contract With God. Eisner’s book, specifically designed to speak to adult readers, provided an example of how the comics medium could be used to serious literary effect.
More and more content was created and marketed as graphic novels. The breakthrough year of 1986 marked the publication of three critically acclaimed, bestselling books: Maus, Art Spiegelman’s Pulitzer Prize–winning novel about the Holocaust; Watchmen, Alan Moore and Dave Gibbons’ political deconstruction of the superhero genre; and The Dark Knight Returns, Frank Miller’s social commentary on media and politics in the Reagan era (with Batman and Superman as allegorical touchstones).

The late nineties brought the influx of manga, which had been slowly coming over to the United States since the late seventies. Ubiquitous in Japan since the end of the second World War, manga differs from American graphic novels in both the storytelling techniques it applies and in subject matter, with each book closely targeted at a specific demographic. Publishers like TokyoPop and Viz have translated a vast array of titles that speak directly to the concerns of young adult readers, who have developed a voracious appetite for the growing genre.

The recent breakthrough literary success of Chris Ware’s Jimmy Corrigan (2000), and Marjane Satrapi’s Persepolis (2003), coupled with the popular success of comics-based movies such as X-Men and Spider-Man on one hand, and Ghost World and American Splendor on the other, has resulted in an explosion in audience interest in all age groups.

Today, like their counterparts in prose, graphic novels cover every conceivable genre, including fiction, biography, history, journalism, education, crime, horror, fantasy, romance, adventure, memoir, humor, politics, and much more. After a century of growth, the comics that started as amusing ephemera in newspapers have matured into a diverse, insightful, and entertaining form that is beginning to enjoy a permanent place in the literary world.

Other helpful books and resources can be found below under “Bibliography.”

Another resource for collection development can be found on the Graphic Novels in Libraries (GNLIB) website. Also available there is an unmoderated e-list specifically for young adult and adult services public librarians.

Library suppliers have compiled core lists of graphic novels (e.g., Brodart’s can be found at http://www.graphicnovels.brodart.com/core_lists.htm).

Consult the Intellectual Freedom Manual, seventh edition (2005), for important collection development resources, such as the Diversity in Collection Development: An Interpretation of the Library Bill of Rights.

Guides to graphic novels
Libraries have created pages devoted to the graphic novel. These are two such sites:

A top 10 list is compiled by Booklist editors every spring in the annual “Spotlight on Graphic Novels feature.” Beginning in 2006, all the Graphic Novel top 10 lists, as well as other graphic novel feature material (interviews, etc.), will be published and archived for subscribers on Booklist Online.

Where to Shelve Graphic Novels?

Libraries determine how to best serve their users' needs and wants by providing a logical, intuitive path to desired materials. They consider a range of factors, including classification system in use, format, building layout, age category, and accessibility. Graphic novels include both fiction and nonfiction, may be directed at any age, and may be viewed as a distinct genre (e.g., mysteries) or as a separate format (e.g., large print). Although shelving practices vary from library to library, graphic novels are commonly shelved: » By age category (e.g., graphic novels for adults are shelved with other adult books; graphic novels for young adults are shelved with other YA books);

Most librarians will shelve graphic novels with overtly sexual adult content in an appropriately "adult" area.3 Nevertheless, shelving location must not be assumed to be a predictor of who will read or borrow a particular graphic novel.

An ounce of prevention is worth a pound of cure. Make sure all library staff and board members understand the library’s policies and procedures for dealing with challenges. Provide customer service and other human relations training that will help staff deal effectively with sensitive matters. “Dealing with Concerns about Library Resources” (Intellectual Freedom Manual, 7th ed., 2005) is an excellent guide to handling complaints effectively.

Key messages about libraries
If responding to a challenge, focus on three key points:

Talking with the media
A challenge may attract media attention. How effectively you work with the media may well determine how big the story becomes and will help to shape public opinion.

Sample questions and answers
The following questions provide sample language for answering questions from parents, the media, and others. You will want to personalize your remarks for your library and community. Remember, keep it simple. Keep it human.

What type of library do you work in?
Public libraries