National Endowment for the Arts: Controversies in Free Speech

National Endowment for the Arts was conceived as part of President Lyndon Johnson's "Great Society." Along with a war on poverty, new education programs, and increased care for the elderly, the Great Society would, Johnson proclaimed, provide money and expertise to "encourage the development and growth of the arts throughout the nation." In 1965, Congress created the National Endowment for the Arts. Its mission was to "foster the excellence, diversity, and vitality of the arts in the United States."

"We fully recognize that no government can call artistic excellence into existence…Nor should any government seek to restrict the freedom of the artist to pursue his own goals in his own way." – Lyndon Johnson

Ronald Reagan attempts to abolish the National Endowment for the Arts, but lacking sufficient support in Congress, was unable to abolish or defund the agency,

Rev. Donald Wildmon, representing the ultra-conservative American Family Foundation of Tupelo, Mississippi, holds a press conference complaining to the members of the National Council on the Arts. Particularly about a grant, in support of "anti-Christian bigotry," referring to the exhibition of Andres Serrano's work, which included Piss Christ, a photograph of a crucifix submerged in a jar of Serrano's urine. Serrano had received a grant of $20,000 from the NEA.

Senators Jesse Helms, William Armstrong, and Alfonse D'Amato quickly denounced Serrano's work. Thirty-six senators signed a letter to the NEA expressing outrage. Rep. Dick Armey, a long-time opponent of federal arts support, sends a letter signed by 107 representatives to the NEA and calls for the cancellation of Robert Mapplethorpe’s upcoming retrospective The Perfect Moment, scheduled to open at Washington's Corcoran Gallery of Art in July. He labels the works of both Mapplethorpe and Serrano as "morally reprehensible trash."

A School of the Art Institute of Chicago student, Dread Scott Tyler, displays "What is the Proper Way to Display An American Flag?". The installation depicts an American flag on the floor, encouraging viewers to walk on it. The US Senate unanimously votes that Tyler committed a federal crime by displaying an American flag on the ground. The school is marched on by US veterans, and the museum receives bomb threats. In July of 1989, the Governor of Illinois signs a bill, despite his outspoken disagreement, that cuts off grants to both the school and the Illinois Arts Alliance, an arts advocacy group that defended the exhibit.

The Corcoran Gallery of Art cancels the Mapplethorpe exhibit, and the cancellation is widely criticized. Artists and LGBT activists picket the gallery, while projecting the censored Mapplethorpe images on the museum's facade. In September, Corcoran's Director formally apologizes, stating that the "Corcoran Gallery of Art, in attempting to defuse the NEA funding controversy by removing itself from the political spotlight, has instead found itself in the center of controversy. By withdrawing from the Mapplethorpe exhibition, we, the board of trustees and the director, have inadvertently offended many members of the arts community which we deeply regret. Our course in the future will be to support art, artists and freedom of expression."

The House Interior Appropriations Subcommittee issues a bill with an amendment that requires grantors to receive approval from the NEA before awarding monetary grants.

Acting chairman of the NEA, Hugh Southern, releases the statement that the government agency "is expressly forbidden in its authorizing legislation from interfering with the artistic choices made by its grantees… even though sometimes the work may be deemed controversial and offensive to some individuals." President Bush appoints John E. Frohnmayer, to replace Southern, a nomination that was supported by arts advocates.

Congress passes the NEA's 1990 Appropriations Bill which contains restrictions on NEA grantmaking procedures. The bill denies funding for projects that 'produce materials which in the judgment of the NEA may be considered obscene, including but not limited to, depictions of sadomasochism, homoeroticism, the sexual exploitation of children, individuals engaged in sex acts, and which do not have serious literary, artistic, political, or scientific value.' The bill authorizes a budget to create a 12-member commission to review the NEA grantmaking policy. The commission members are appointed by the Speaker of the House, the Senate president, and President Bush. 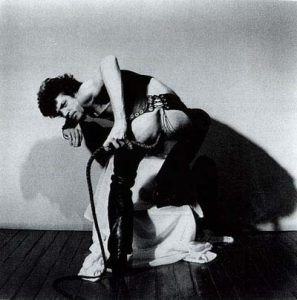 The exhibition of Robert Mapplethorpe's The Perfect Moment show premiered at the Cincinnati Contemporary Arts Center, which included five sadomasochistic portraits and two images of naked minors with graphic focus on the genitals. It resulted in the unsuccessful prosecution of the Cincinnati Contemporary Arts Center and its director Dennis Barrie on charges of "pandering obscenity".

The art exhibit "Witness: Against Our Vanishing", which discusses the controversial topic of 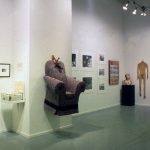 AIDS, opens in New York's Artists Space. Curated by the photographer Nan Goldin, all of the work is created by artists with AIDS or by artists who had died of AIDS. The opening draws 15,000 people. Pressured by Senator Jesse Helms to censor the exhibit, NEA chairman John Frohnmayer withdraws, then restores a $10,000 grant. Helms also publically criticizes New York's Ridiculous Theatrical Company, the theatre that performed a gender-bending production of Camille, written, directed and starring the company’s founder, Charles Ludlam, who, like Mapplethorpe, falls victim to AIDS.

Along with Artists Space, Senator Jesse Helms targets organizations like Project Artaud and Research Publications of San Francisco, Center on Contemporary Art and Allied Arts, the List Visual Arts Center of MIT, Art Matters, and the American Institute of Architects. Rhetoric on both the right and the left is extreme. The left makes comparisons to the Ayatollah Khomeini. Robert Brustein, critic and theater director, called for political action against the pro-censorship politicians, saying "Gradually, the real enemy begins to take shape–not a few 'dirty' pictures, but the whole corpus of modern avant-garde art."

Out of 85,000 grants during its 25 year history, only twenty pieces have been questioned.

President Bush requests a budget of $175 million for the NEA in his 1991 budget report, a two percent increase from the 1990 appropriation of $171.3 million. Reauthorization of the NEA, National Endowment for the Humanities and Institute of Museum Services occurs every five years under the review of The House Education and Labor's Postsecondary Education subcommittee, and The Senate Labor and Human Resources Subcommittee on Education, Arts and Humanities.