The Struggle for Civil Rights and the First Amendment 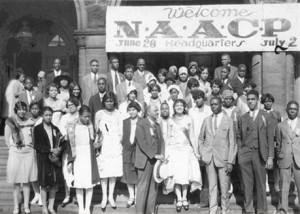 Wisely, the NAACP chose to resist these violations of their members' constitutional rights by filing lawsuits. Over the course of these lawsuits and the resulting court decisions, the NAACP helped to shape important First Amendment precedent that benefits all Americans who cherish their right to free speech and to advocate for unpopular causes.

Here are some examples:

In 1959, the Florida legislature authorized the Legislative Investigation Committee to investigate various organizations for Communist infiltration. Among the groups specificaly selected was the Miami branch of the NAACP. When the president of the Miami NAACP refused to produce the organization's records or cross-check names of members against a list of suspected Communists, he was convicted of contempt.

The U.S. Supreme Court reversed his conviction by a 5-4 vote. In a concurring opinion, Justice Black wrote, "the constitutional right of association includes the right of any person to associate with…..people of all kinds of beliefs, popular or unpopular.'

In 1956, the Alabama Attorney General's office sued the NAACP in an attempt to prevent them from operating in the state under a state law that mandated filing certain information with the state government. During the course of the hearing, the NAACP refused to produce various records, including a list of members. Because of its refusal, the NAACP was held in contempt of court. The U.S. Supreme Court later reversed the conviction in a unanimous ruling.

The ruling was important for two reasons: First, it established that an organization could defend the constitutional rights of its membership. Second, it equated the right to "freedom of association" to other First Amendment rights such as freedom of speech and assembly. (The NAACP's attempts to operate in the Alabama reached the U.S. Supreme Court on three other occassions during this time period)

In 1966, the NAACP chapter in Claiborne County, Mississippi launched a boycott of local businesses because its members felt that they were being treated unequally by local government and business leaders. The boycott mainly involved picketing and speeches but some violent acts and threats did occur. Some white merchants joined together and sued the NAACP and various other boycotters for interfering with their businesses and causing monetary losses.

The Mississippi Supreme Court upheld a lower court decision declaring the boycott illegal but that decision was later overturned by the U.S. Supreme Court which recognized that the boycotters' non-violent tactics were protected by the First Amendment.

In a case that did not involve the NAACP, an African-American was arrested and prosecuted for violating a New York state law that banned mutilation of the flag "by words or act". Street had burned an American flag on a street corner after hearing a news report that civil rights leader James Meredith had been shot. After New York state courts upheld his conviction, the U.S. Supreme Court reversed the conviction based on free speech grounds.