Bush Monkeys by Chris Savido Cause Cancellation of Exhibition

Previous Next
Bush Monkeys by Chris Savido Cause Cancellation of Exhibition 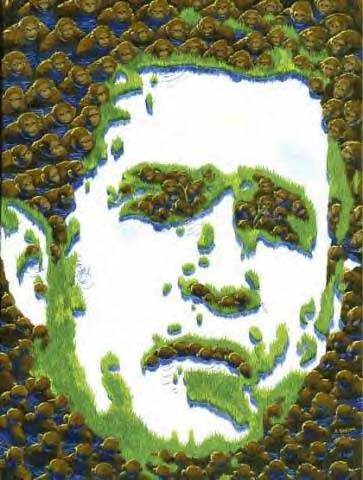 After a Chelsea Market manager saw "Bush Monkeys," a small acrylic on canvas by Chris Savido, he closed down the whole 60-piece show, which included the work. From afar, "Bush Monkeys" looks like a portrait of President Bush, but when you get closer you see the image is made up of monkeys swimming in a marsh.

The Chelsea Market public space in New York has hosted many exhibitions; as a private space it remains free to pick what art is to be shown there. However, freedom from the imperatives of the First Amendment, does not entail freedom from the court of public opinion. As often happens the removal of Savido’s presidential portrait gave the work much more publicity that it might otherwise have had and exposed Chelsea Market to a fair dose of anger. To many of us the incident reveals a sinister pall of unease regarding any criticism or satire of George W. Bush. After September 11 dissent was labeled betrayal, now we can’t even laugh at a bunch of monkeys used to outline the president’s face. That, of course, makes all of us objects of ridicule in all the countries where the incident was immediately publicized—from South Africa, to India and Australia.

Chris Savido’s Bush Monkeys is being auctioned off with 25% of the proceeds going to NCAC. Click here for auction info.